dave graney
2022 ROCK album with Clare Moore IN A MISTLY to be released 11-11-22 WORKSHY - 2017 memoir out on Affirm Press. Available at shows or via website. Moodists - Coral Snakes - mistLY. I don’t know what I am and don’t want to know any more than I already know. I aspire, in my music , to 40s B Movie (voice and presence) and wish I could play guitar like Dickey Betts, John Cippolina or Grant Green - but not in this lifetime, I know.

Live dates in Qld and NSW

Our shows in Adelaide went well. We played at the Trinity Sessions which is a church on Goodwood road. A still functioning church which does a lot of community events and yes, hosts and presents gigs by contemporary music people, like us.

It sounded pretty deluxe in tehre and we played two sets. At the end people stood up and gave us an ovation! That was not the usual thing. It was nice, though.

People mentioned lyrical things like my mentioning old time footballers Bob Shearman and Tracy Braidwood in our song I Was No Captain.

A man came from the Yorke Peninsula with about twenty album slicks for us to sign. A farmer, he had last been able to see us in 2002.

Another fellow mentioned he grew up near me and mentioned the street name and that my father Noel had painted their house once.

Yes, it gets pretty intimate in South Australia.

We got to hear the mastered version of our new album on the way home. Its sounding pretty great. The engineer said he would put it through his boutixue gear and give it a "real 1978 sheen". "That will be great!" I said.

Yes, it's a rocker. It will be called In A Mistly or inamistly. However the letters are drawn or fall. Still waiting for the cover art.  It'll be a Dave Graney and Clare Moore album, though the mistLY - Stu Thomas on bass and Stuart Perera on guitar - play on four tracks. Clare and I play everything on the other eight save for some fantastic sax from Dave Wray. He plays on three songs. Will Hindmarsh and Emily Jarrett sing on another song.

The title - inamistly - is a nod to an early jazz composition from Bix Beiderbecke, In A Mist.

Mostly its a nod to our great band mates Stu and Stuart who really kick it on the four tracks they appear on. So its Dave Graney and Clare Moore,  inamistly.

These dates coming up are our final run of shows to bring EVERYTHING WAS FUNNY to people. 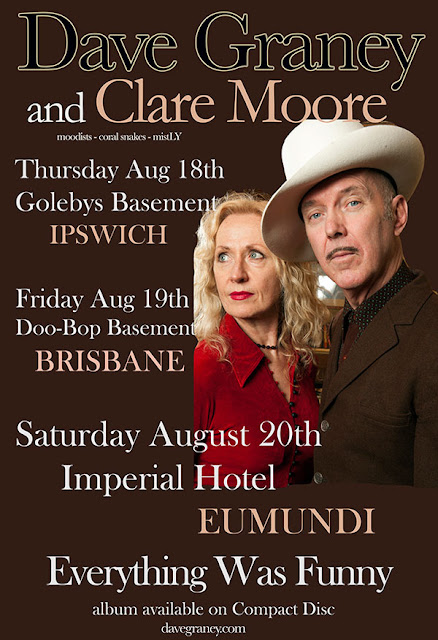 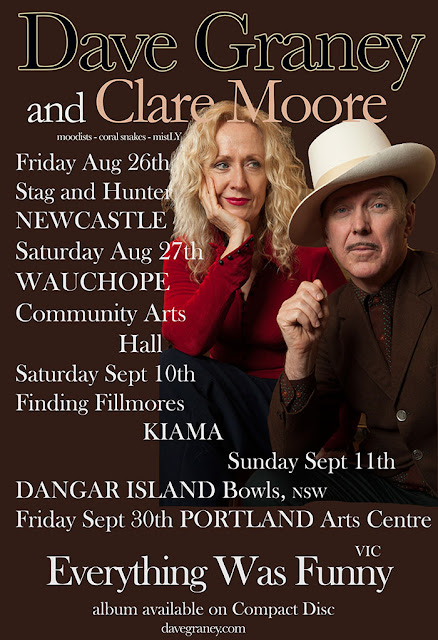 Oxley Lane, (opposite Bain Park), Wauchope NSW 2446.
Saturday September 10th Finding Fillmores, Kiama, NSW. A great , innovative venue in an inventive space behind some main street buildings and up a back alley in this town on a beautiful coast in NSW.
Unit 2/38-40 Manning St, Kiama.
Sunday September 11th DANGAR ISLAND BOWLING CLUB. Yes, we'll be parking our van and loading our gear onto a small boat to make our way across to this exotic island on the Hawksbury River to play music in the grass in the afternoon. Lovely! 12-2pm.
Friday September 30th Portland Arts Centre. Postponed three times now! This time for sure!
Portland Arts Centre, 4A Glenelg Street, Portland Victoria.

Dave Graney and Clare Moore - EVERYTHING WAS FUNNY

Dave Graney and Clare Moore - Everything Was Funny 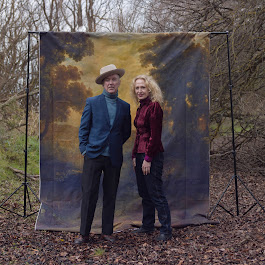 album out on Compact Disc and digital edition.