Seeing as Dave Western was such a big part of our recent trip to London I thought I should show some of the work he did with us. Try for some sort of context.

After the Moodists came to a  slow halt in 1987 I sat around for a while, just enjoying life - working and living in London. Listening to music again and getting tips to sounds from people like Epic Soundtracks, I got an idea together about how to be  a singer songwriter. Lou Reed and Fred Neil were my north stars. East Coast , electric guitar types. Kind of jazzy. I also loved the west coast pyschedelic sounds and images of the CHARLATANS and QUICKSILVER. Kind of a buckskin feel.

Clare kept playing with different people, meeting different people. Including a hilarious sounding audition for the Jesus and Mary Chain when they were putting out their second album, DARKLANDS.

Gordy Blair was in one of the bands Clare played in.  They included Adam Sanderson who had been in early Creation records band the JASMINE MINKS. We had been involved with CREATION as well. It was a small kind of scene. Adam had a great David Crosby kind of look going. 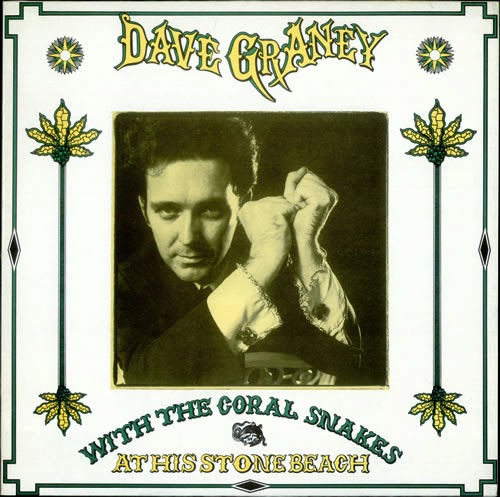 This was the fist 4 track ep we put out on Fire Records. Art by Dave Western. Photo by Bleddyn Butcher.
Produced by Barry Adamson. I had written the liner notes for his MOSS SIDE STORY the previous year.
We did a lot of shows in London. Louis Vause on keys who we had met at one of our jobs. he played in a great band called the HACKNEY 5-0. Gordy Blair on bass.
Malcolm Ross had played in the last era of the Moodists (along with David McClymont - also from Orange Juice).

Just as the EP came out Clare Moore and I were asked to leave the UK and return to Australia. A real trauma for us but we planned to return and play with this great band again.

In Melbourne we formed a band called the WHITE BUFFALOES in 1989 and recorded this album for Fire Records. I didn't want to record all the songs I had already worked up with teh London band so we cooked up some new stuff. Art by Dave Western. We played a lot in Melbourne and Sydney. Then Conway Savage left to join the Bad Seeds. (He had brought in Rod Hayward on guitar) 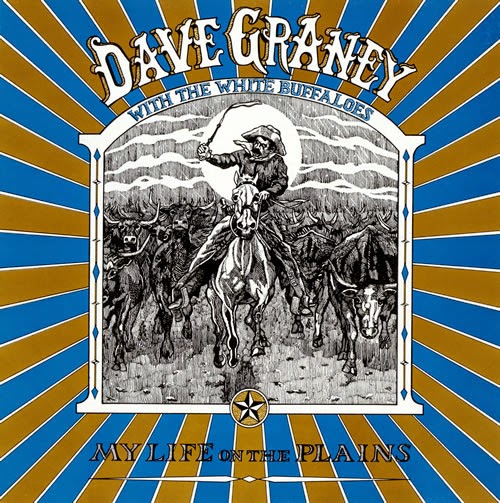 This album was released on vinyl and also the new CD format as well! Included the previous EP on that. Produced in melbourne by Phil Vinall, who we had met in London. Fire Records sent him out to do the job.

We did a live recording which came out on a 5 track ep. Art by Dave Western. (Illustration from a  photo by Tony Mahony) 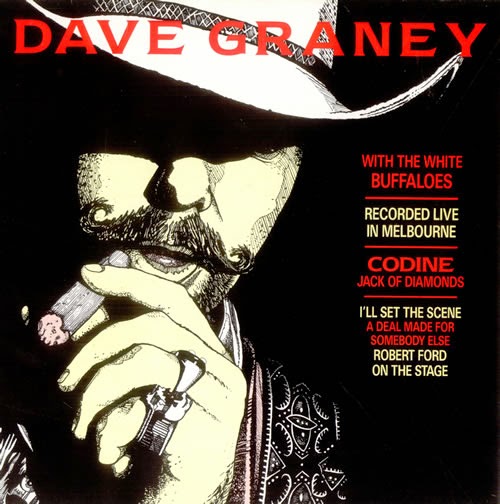 In 1990 we returned to London , Clare Moore, myself and Rod Hayward and hooked up with Gordy, Rod , Malcolm, Louis and Phil Vinall to record the album of my schemes and dreams. I WAS THE HUNTER AND I WAS THE PREY. 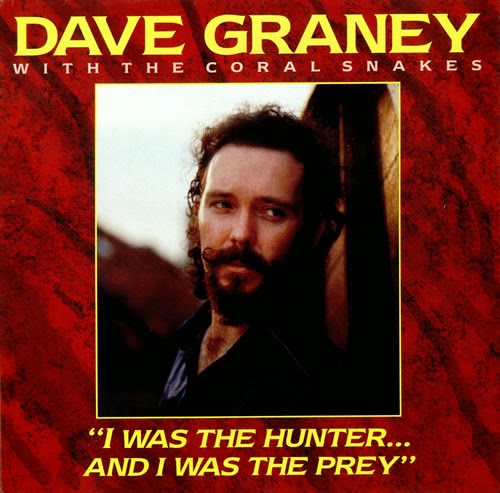 It was done in a studio in Croydon owned by Mathew Fisher who played the organ on A Whiter Shade of Pale.Thanks again to Phil Vinall for pulling it together.

We stayed in the UK for about 6 months and did some acoustic dates in Europe.

Just as the album was done a big indie distributor crashed and a lot of labels like FIRE were badly affected. The album plans were put on hold. Clare and I returned to Melbourne. i was quite devastated. Totally bummed out. The total blues. To the core. Wasted. Melbourne and its live music scene kind of revived me. I ran into  Robin Casinader on a bus and he said he'd like to join the band. Clare, Rod, Robin and then Andrew Picouleau on bass until Gordy Blair came out from the UK. We were a fearless unit. Coming back from the dead.

The album  came out in 1992, a few months before Lure of the Tropics and less than a year before NIGHT OF THE WOLVERINE came out.

I have always loved "I was the hunter and I was the prey" the most. I put so much into it.

It included the CODINE ep on the cd. Art By Dave Western. Photo by Anthony Clare. 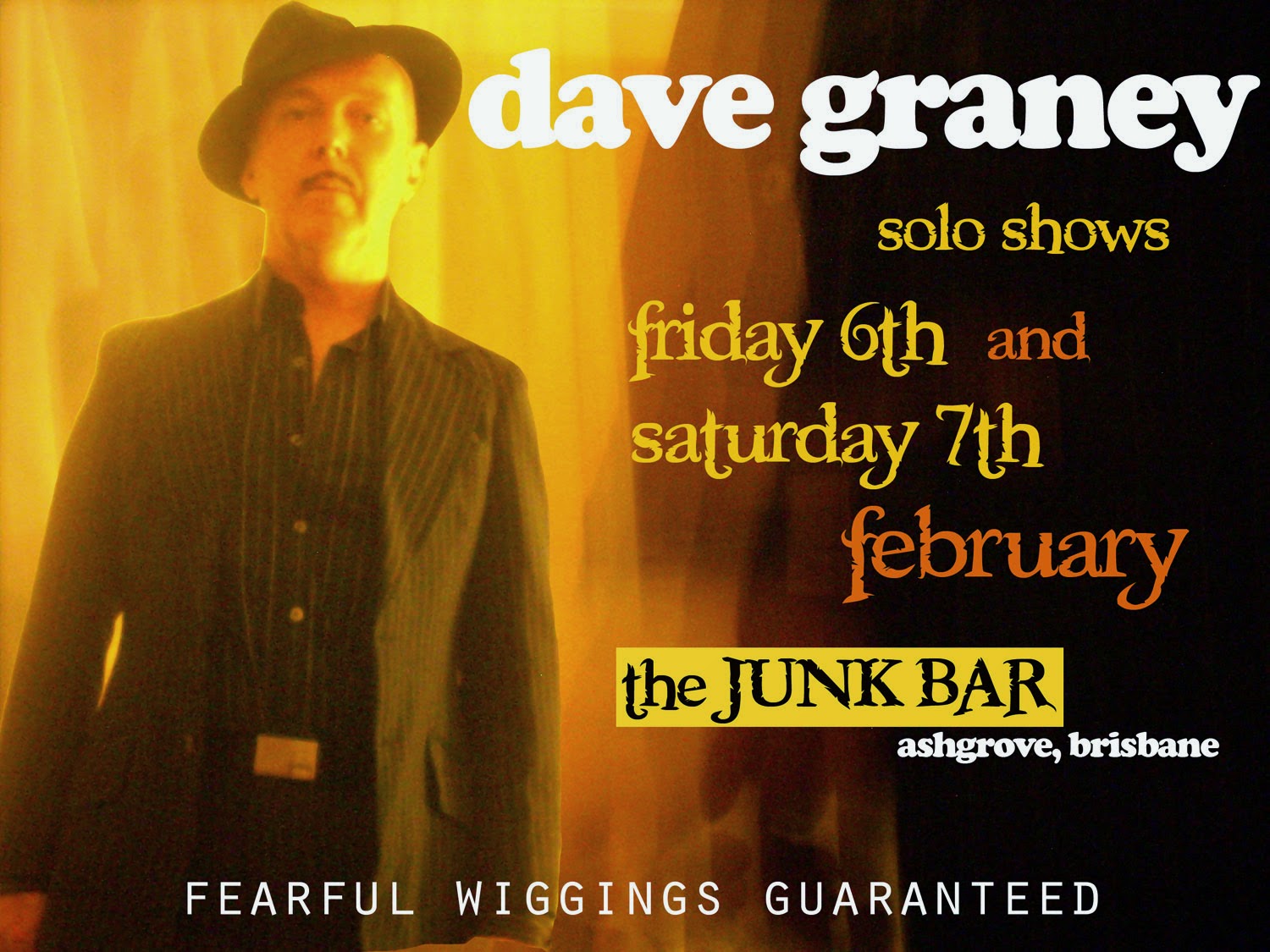 Hey I know this is months after the facts now. Slackness- I demand it!

After a wonderful Indian summer all through September and October in Europe we skipped from Austria to the UK. This first involved a last lingering look at Vienna and then a long drive to Calais.

We said goodbye to Phil Shoenfeldt and his band on the street in Vienna- a beautiful city I would love to spend more time in. 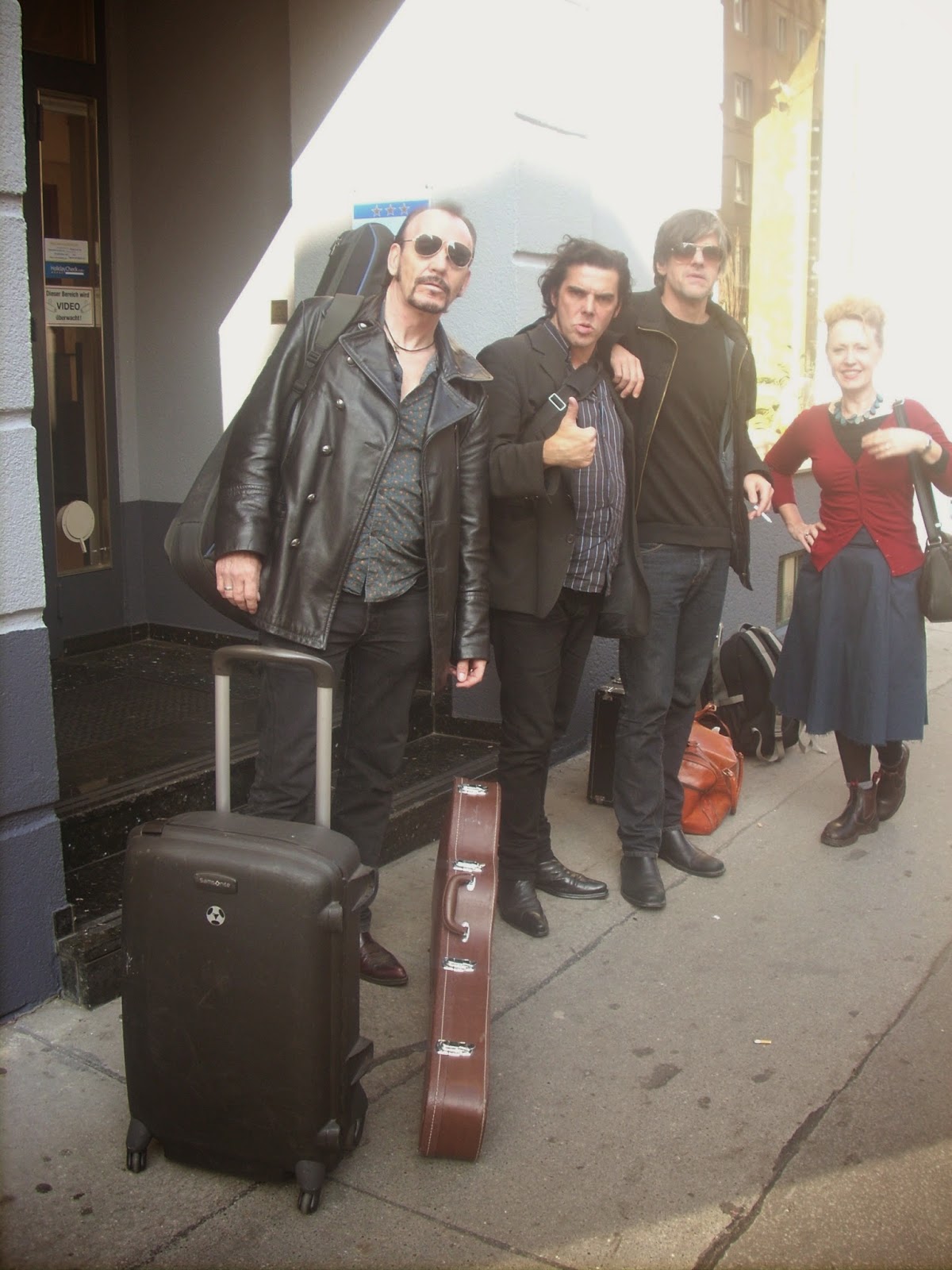 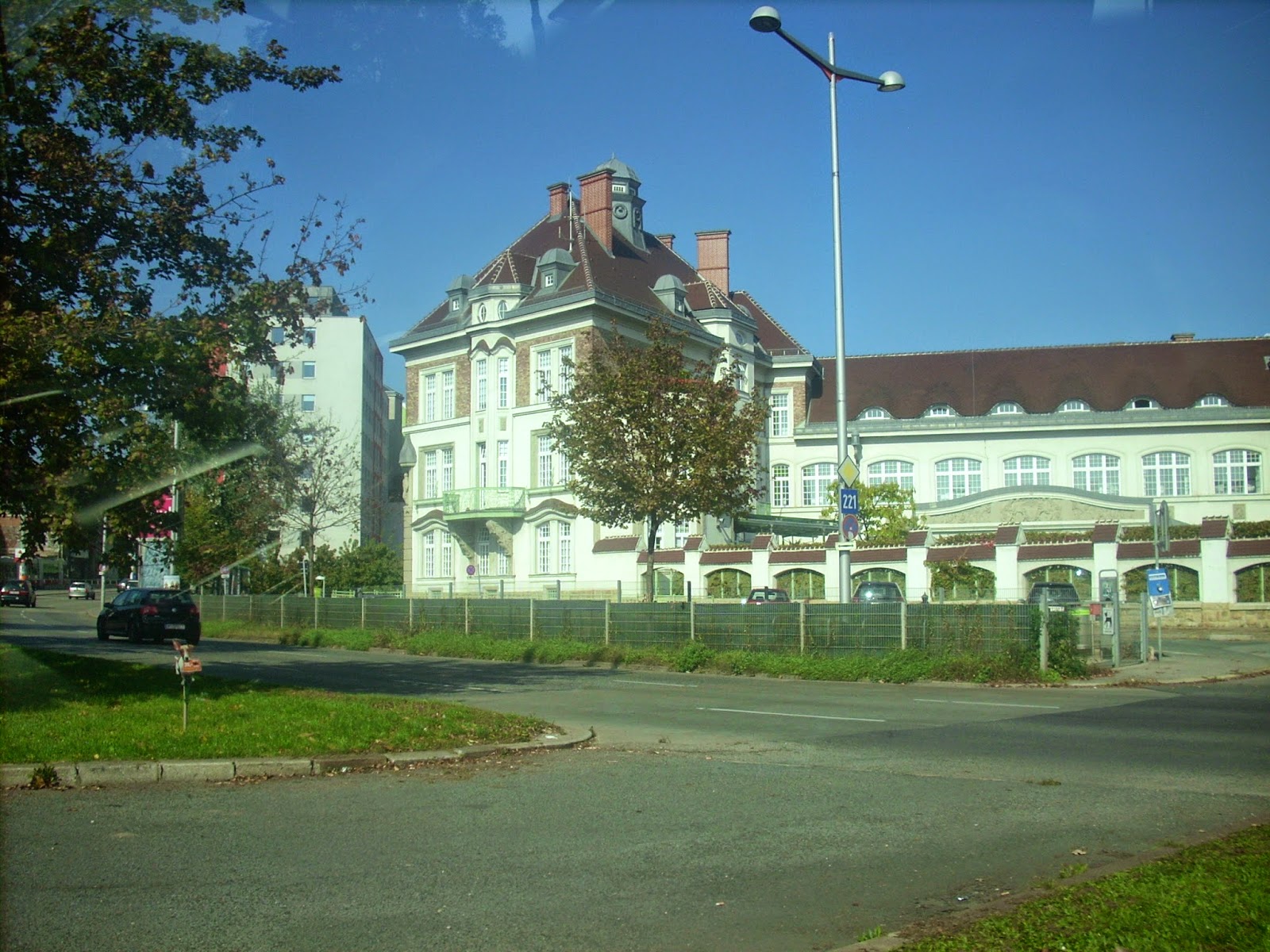 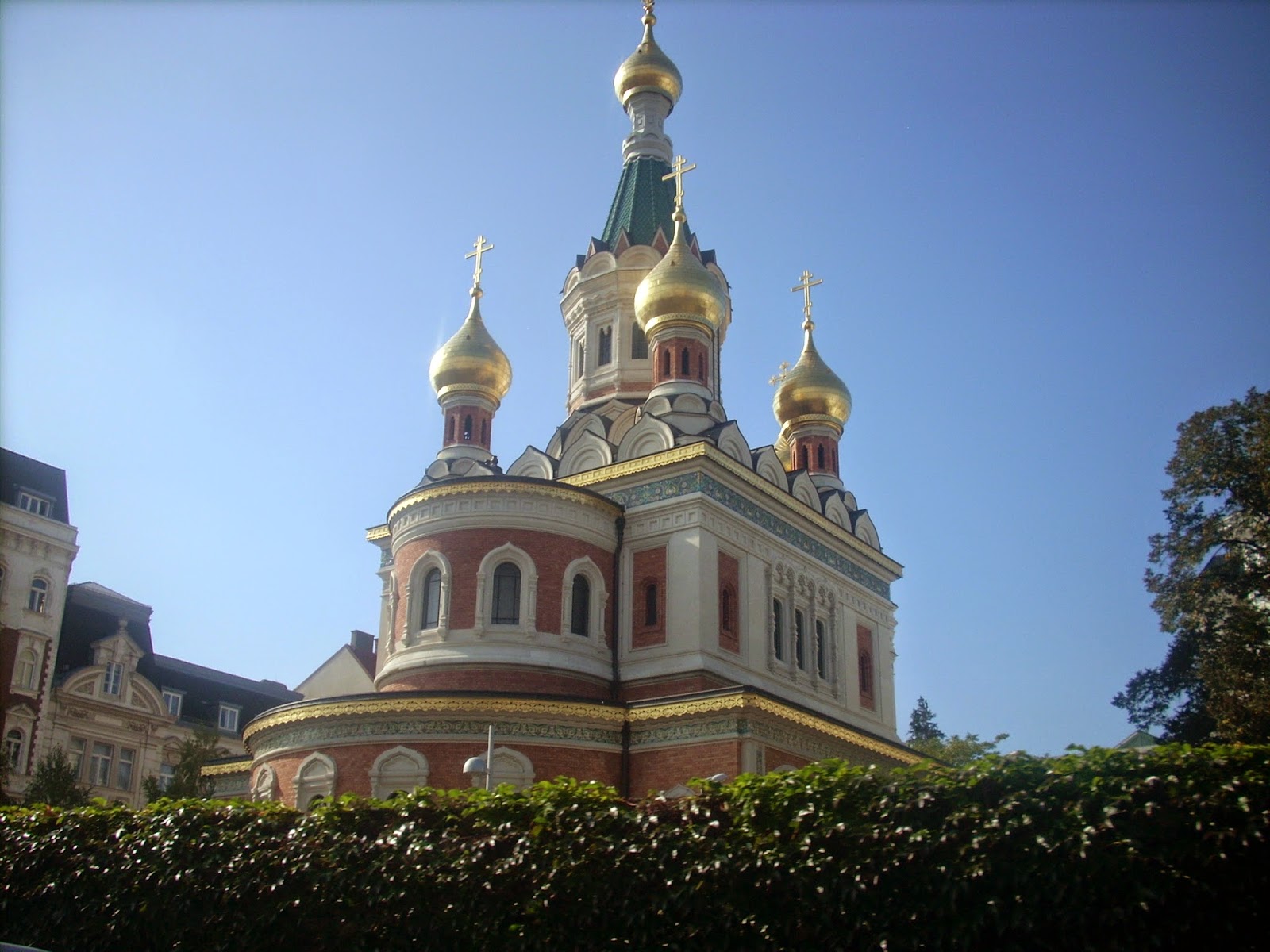 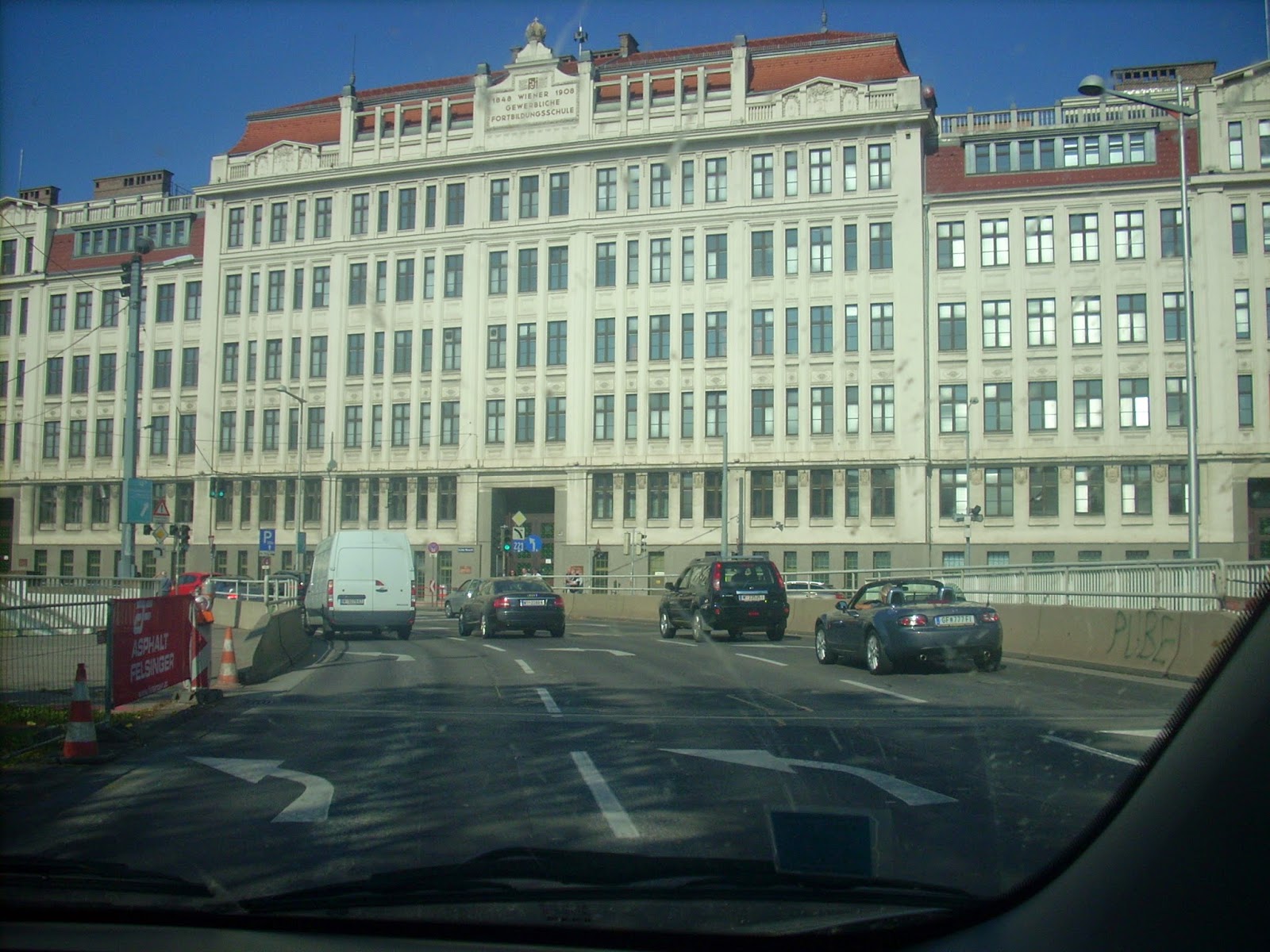 I did all the driving for the trip. Clare found me a can of cold HEMP to help on this leg. 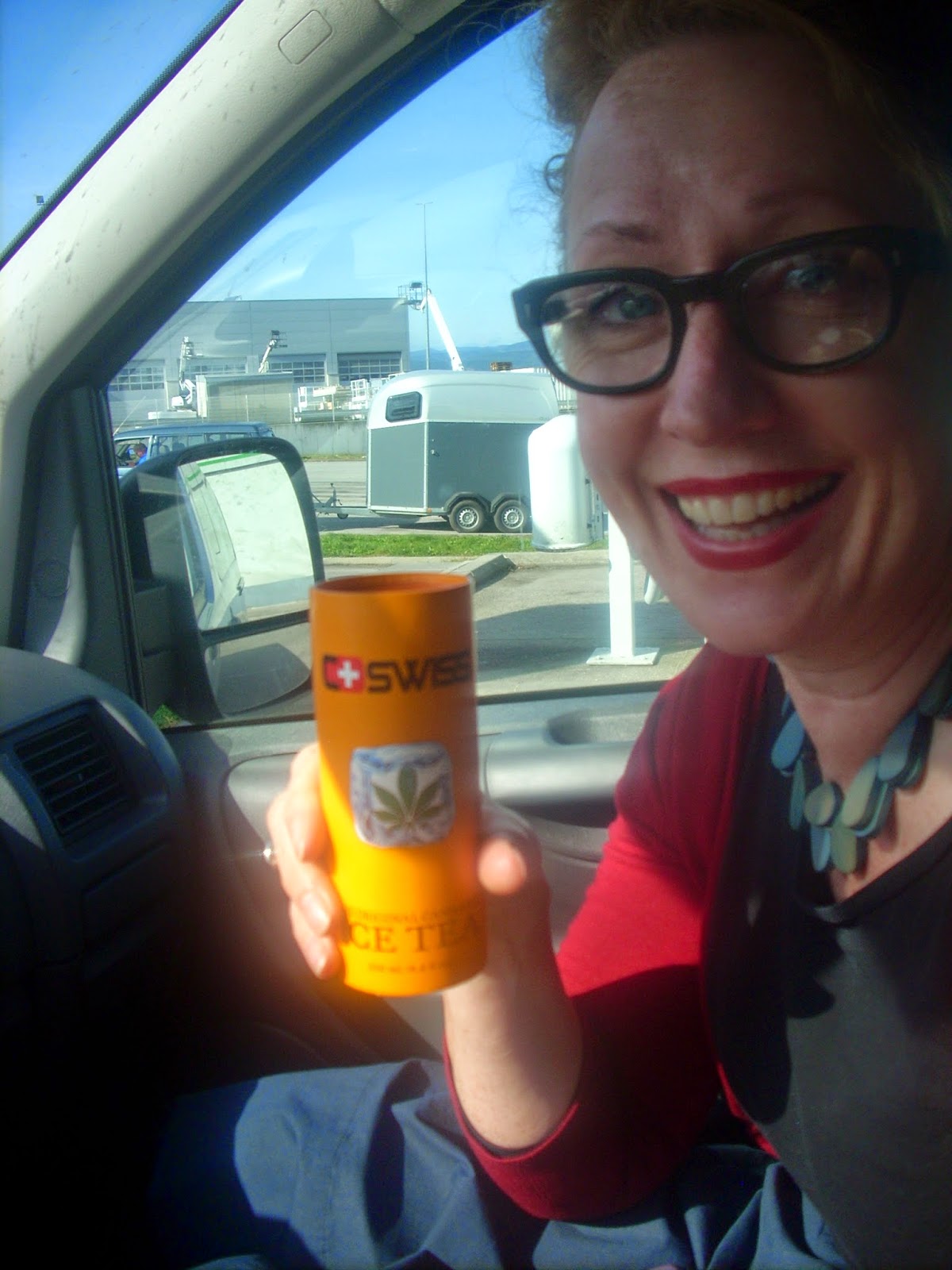 We arrived in Calais and jumped on a boat to Dover, presuming to get a  train at the other end. Since the tunnel, there are , however, not so many trains so we had a long walk with much luggage to a  lonely depot and eventually caught a cab. Calculations on train fares to London and then several trips to Brixton resulted in a  decision to take the taxi  ALL THE WAY TO LONDON! This was actually cheaper. The driver was a nice guy, a Kurdish gent who brought us up to date on the conflict in Iran/Iraq and the IS and the oil all mixed up in it.

We arrived in London and stayed with an old friend DAVE WESTERN in Brixton. 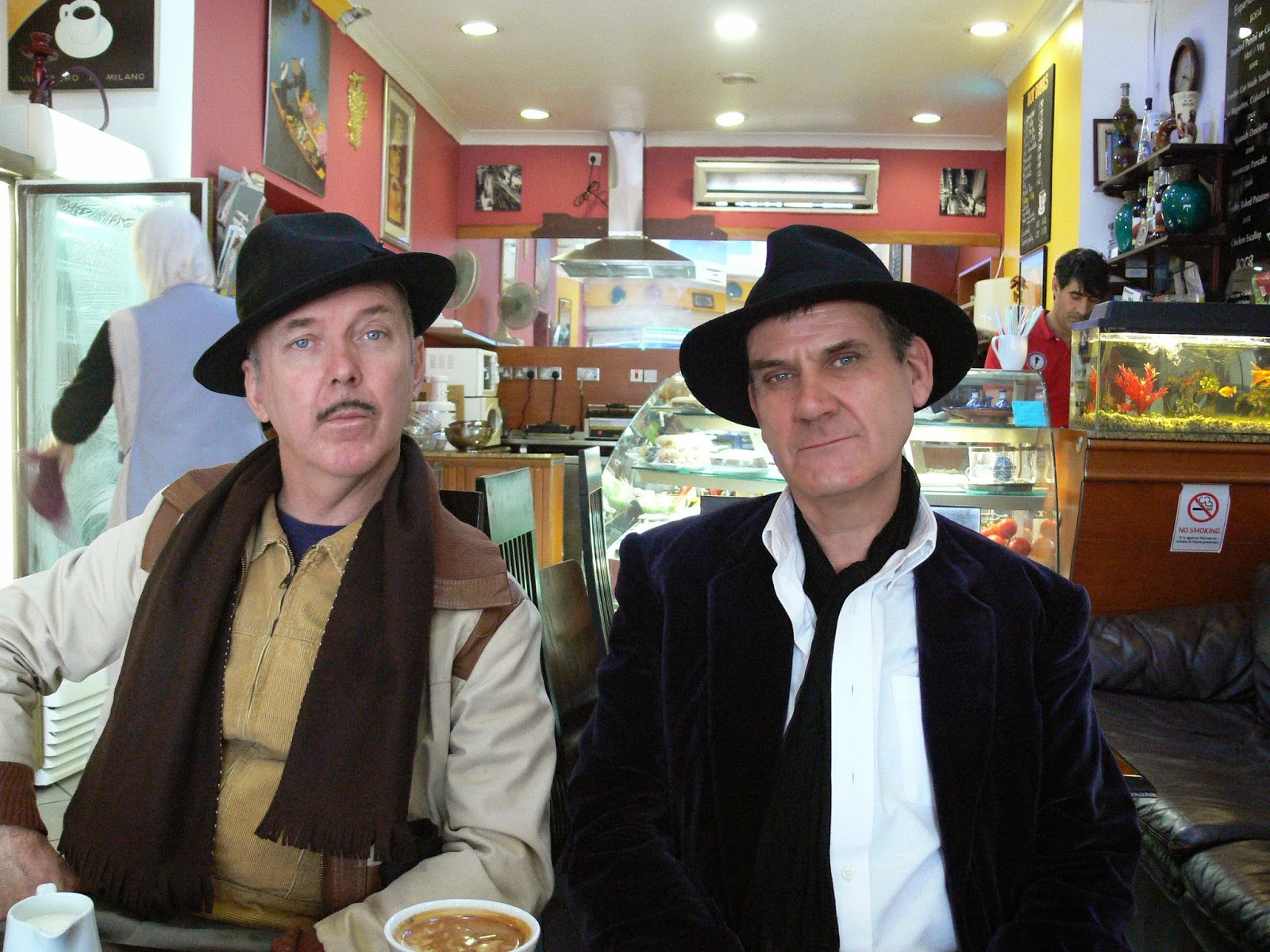 Dave did the covers for the White Buffaloes album "my life on the plains" , the first Coral Snakes album " I was the Hunter and I was the prey " and the "codine" EP.

His art can be seen here.

We went on many trips around London. One was to find the first squat we lived in on arriving in 1983. It was Robert and Lindys's from the Go Betweens in West Hampstead. Rowland Howard and Genevieve were on the top floor. It was quite a soft landing , in a very genteel part of London. It lasted for a few months, until a bunch of heavy guys came and threw all of our stuff out onto the street. We didn't really have much, and walked off to god knows where with Rowlands voice coming down the stairs , "Gen!where's my Lego set!"

We waked around for a while and were pretty sure  it was this one ... 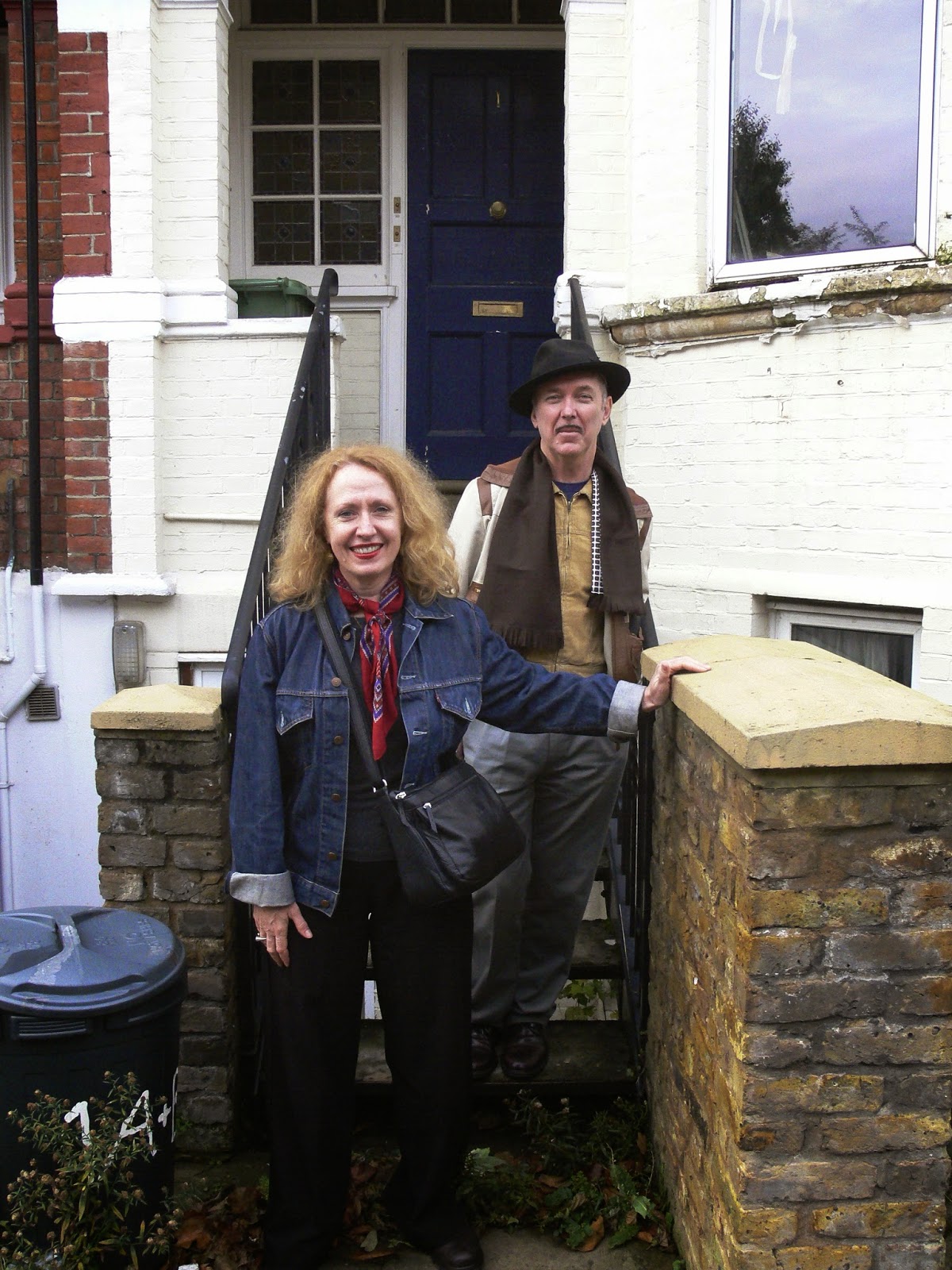 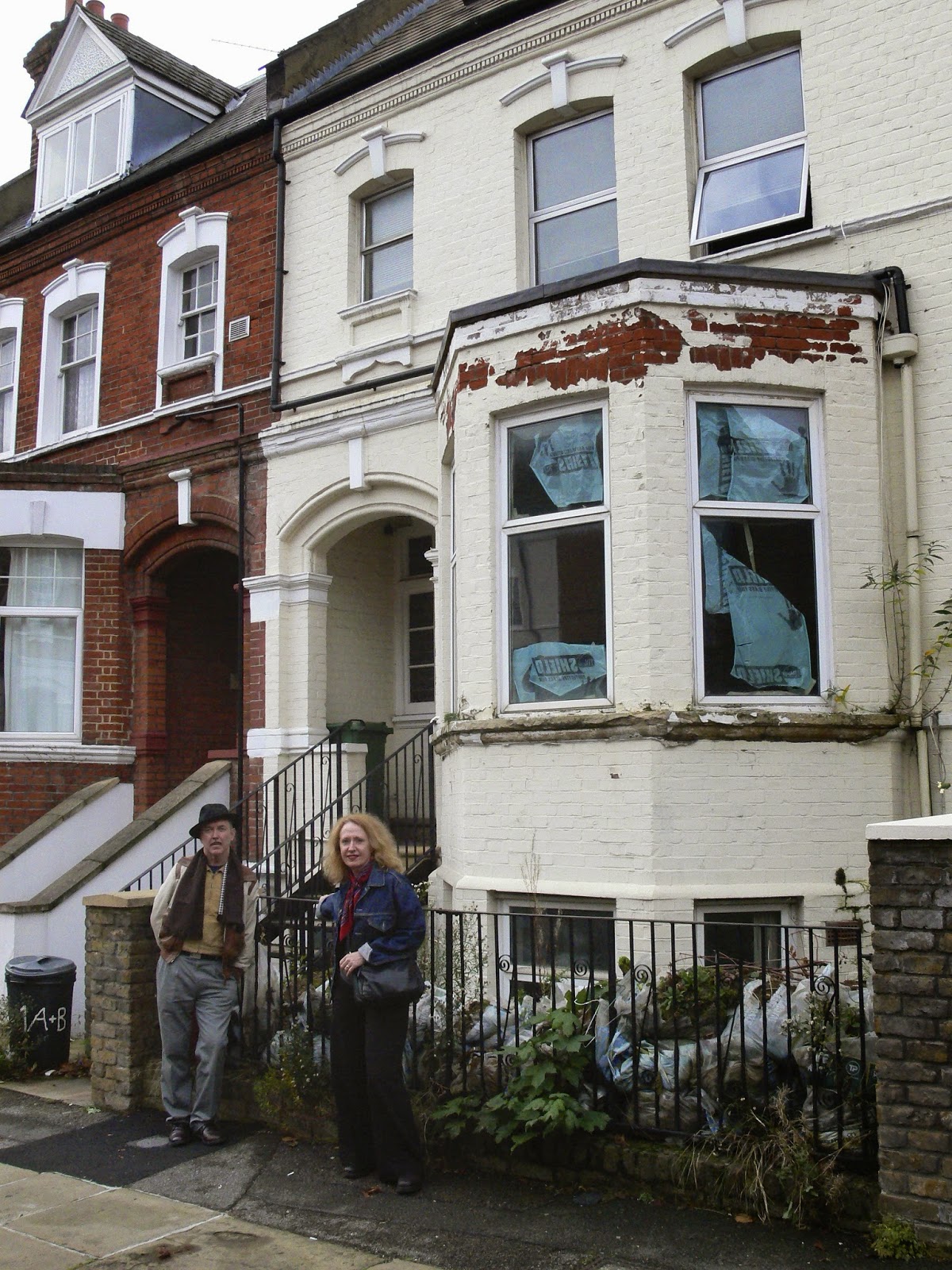 While walking around, we visited this pub , which used to be called the Moonlight Club. Joy Division played here- as did the Birthday Party. I tweeted it and a UK gent added that it was also Klooks Kleek in the mid 60s- being very close to Decca Records and was host to many people such as John Mayall, the Graham Bond Organization and Led Zeppelin (they did their first three London gigs there) 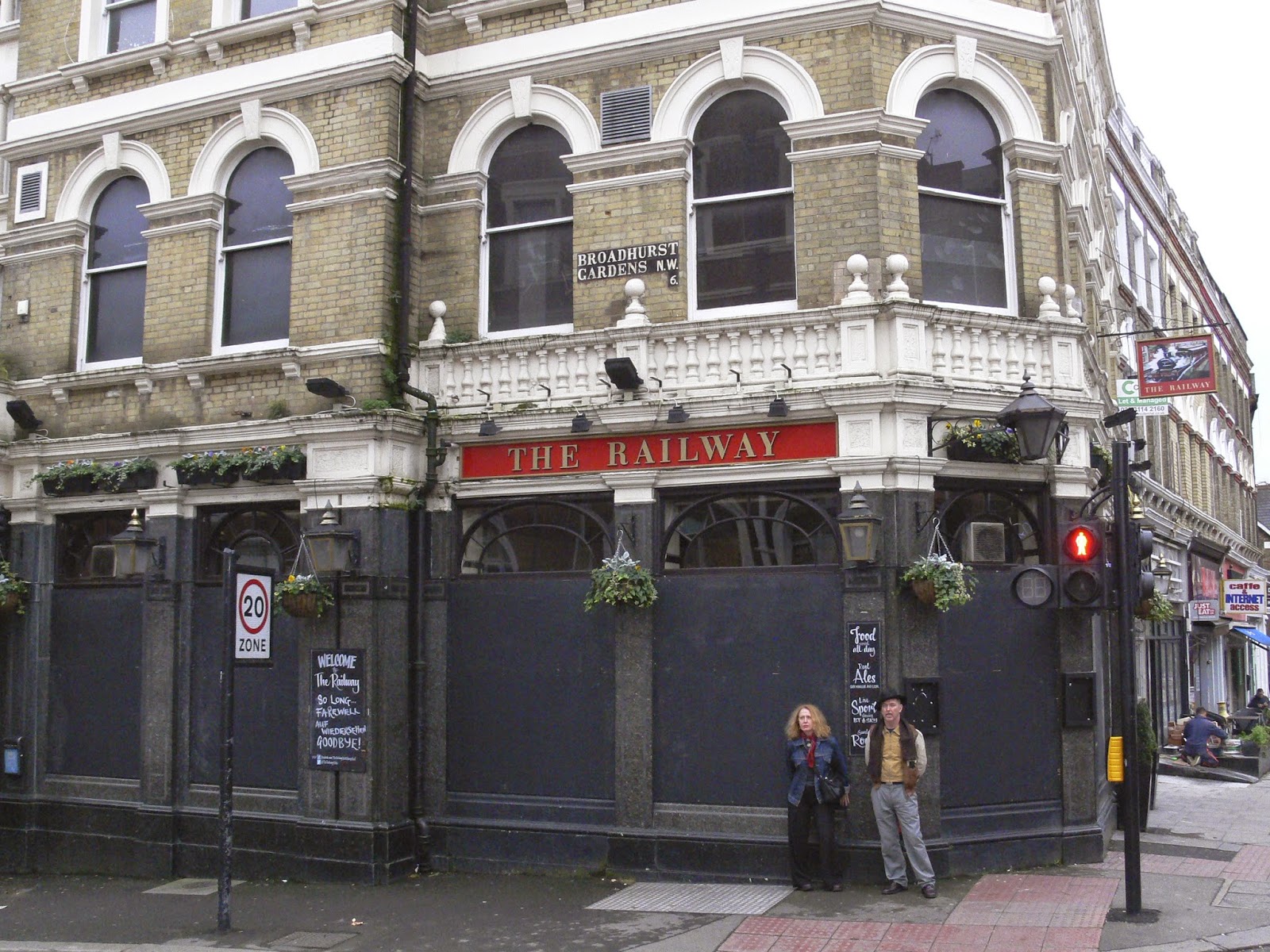 A recent book about Klooks Kleek and the Railway Hotel

Nearby was this laneway. 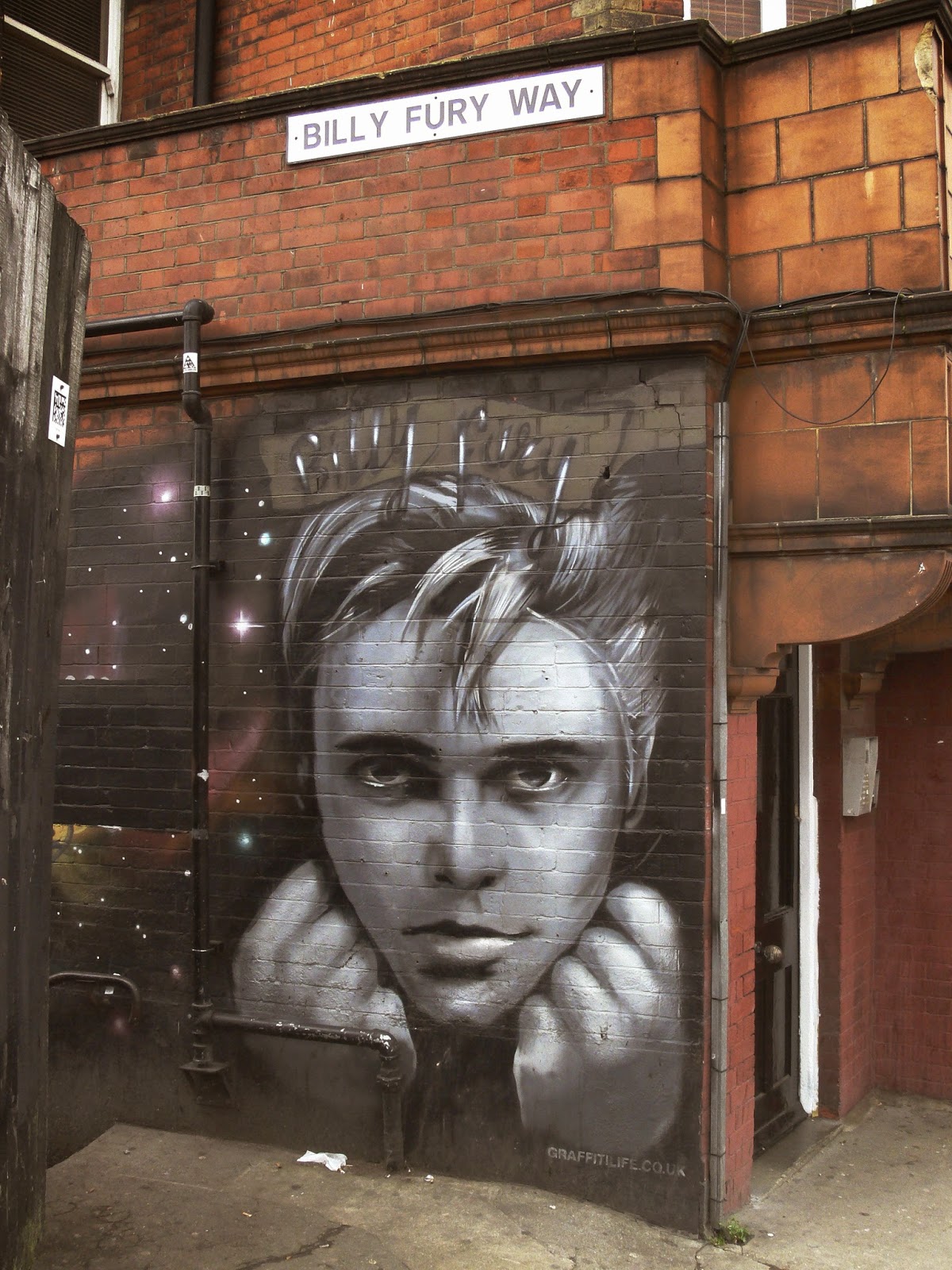 We walked down it, a long way to Finchley Rd? Very narrow and grim and smelling of piss. 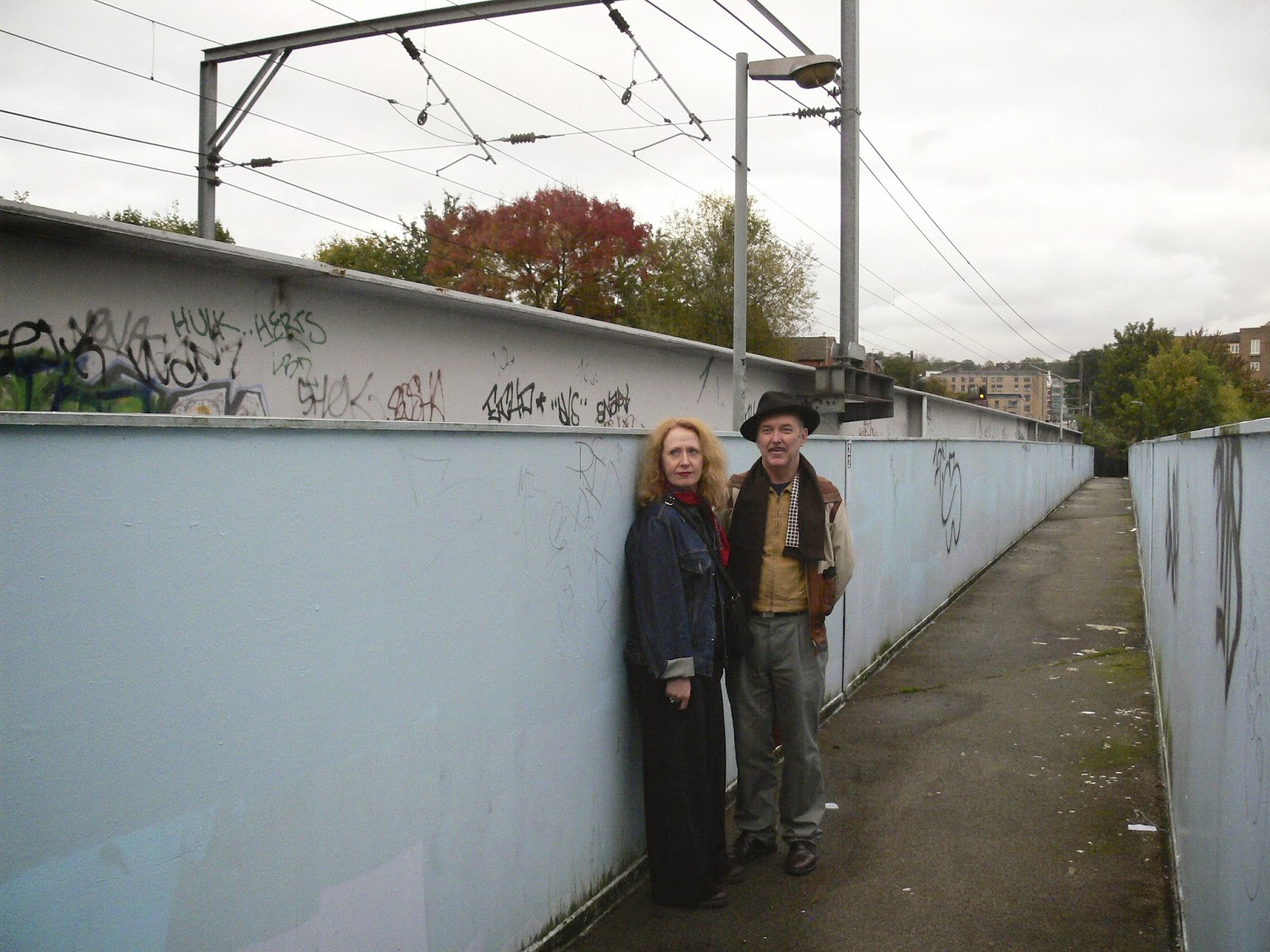 We walked the backstreets of Brixton and dave brought us to this place. A plaque to early 20th century theatrical impressario Fred Karno, who took Charlie Chaplin and Stan Laurel to the USA. 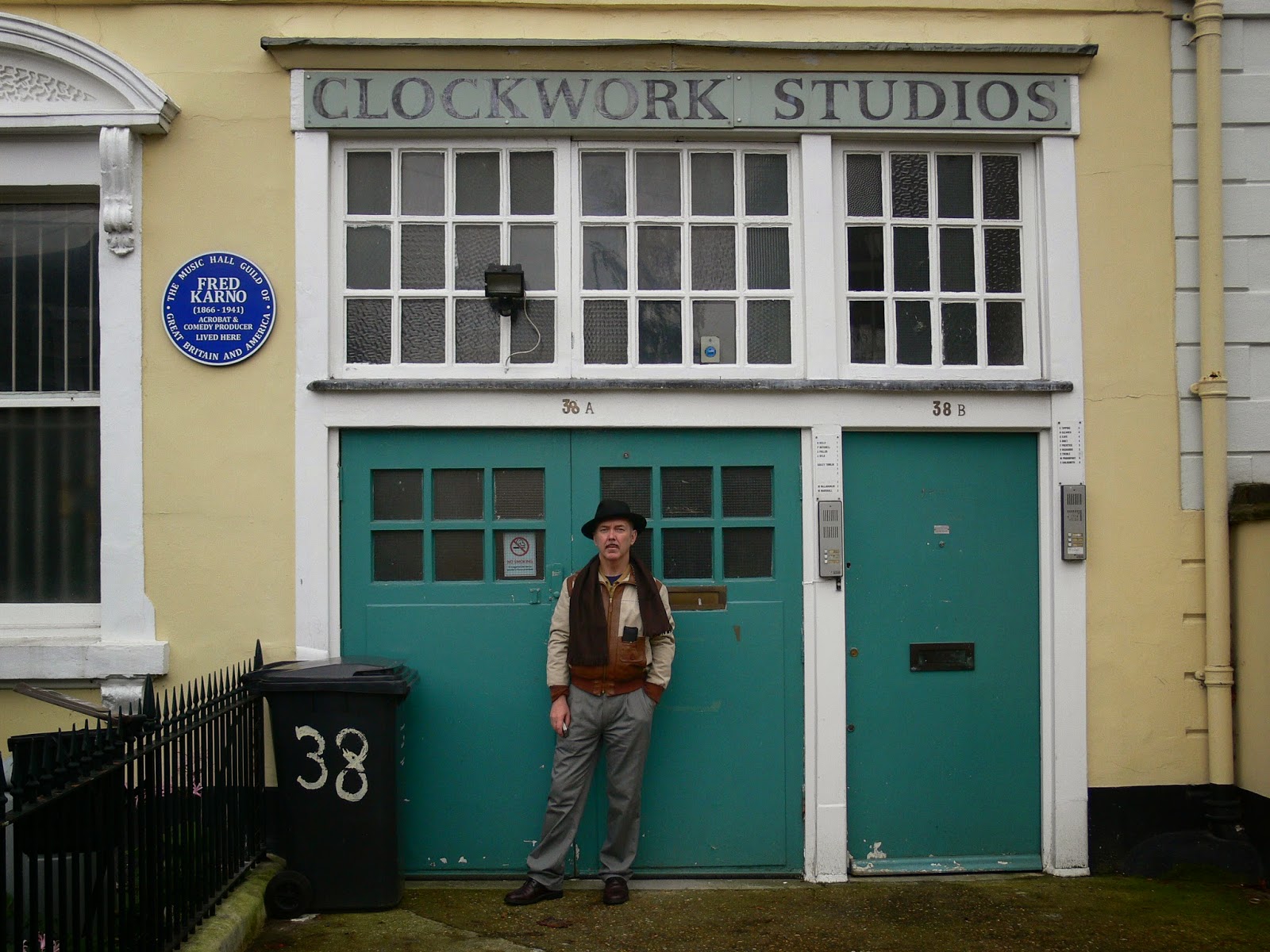 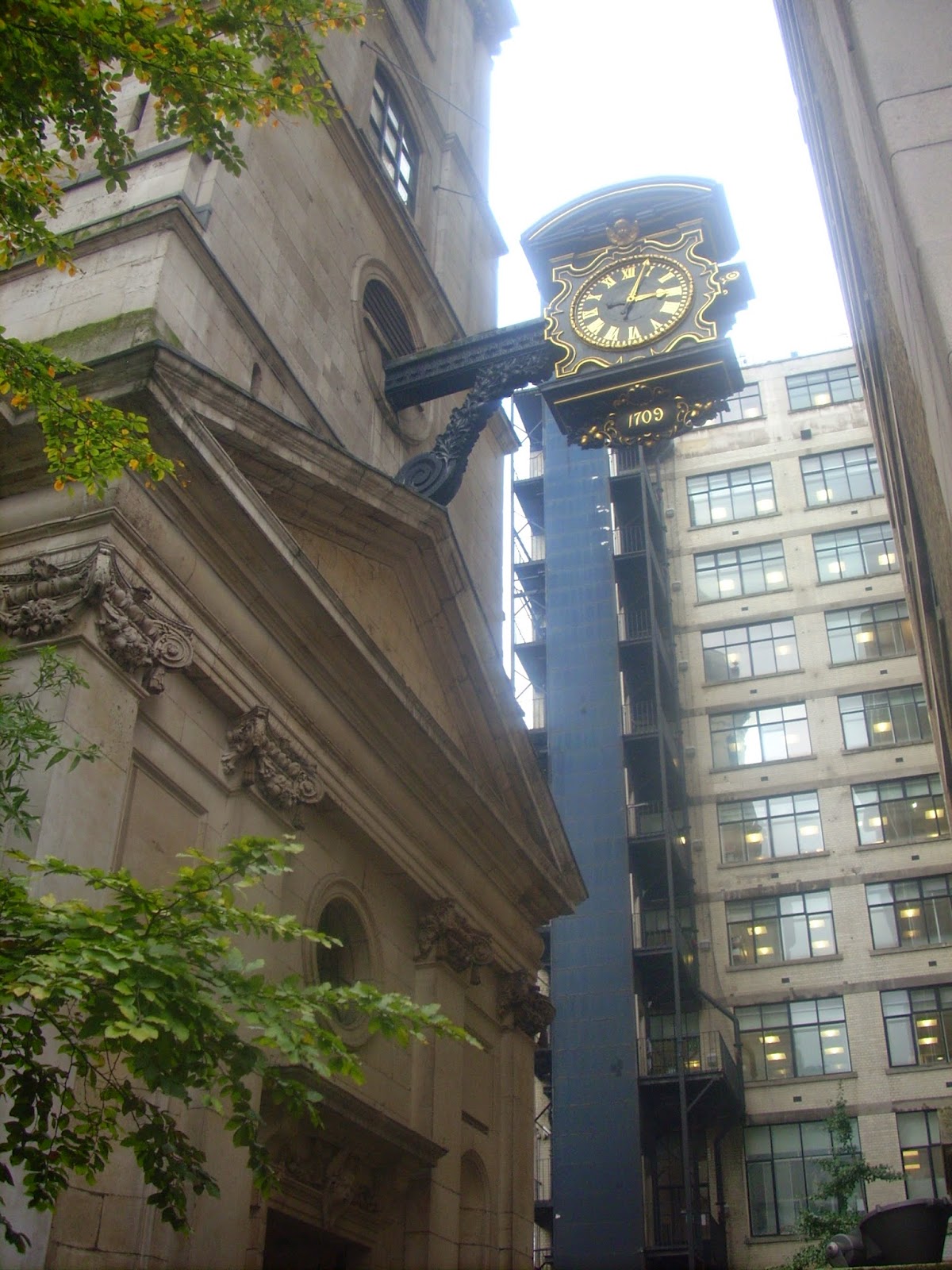 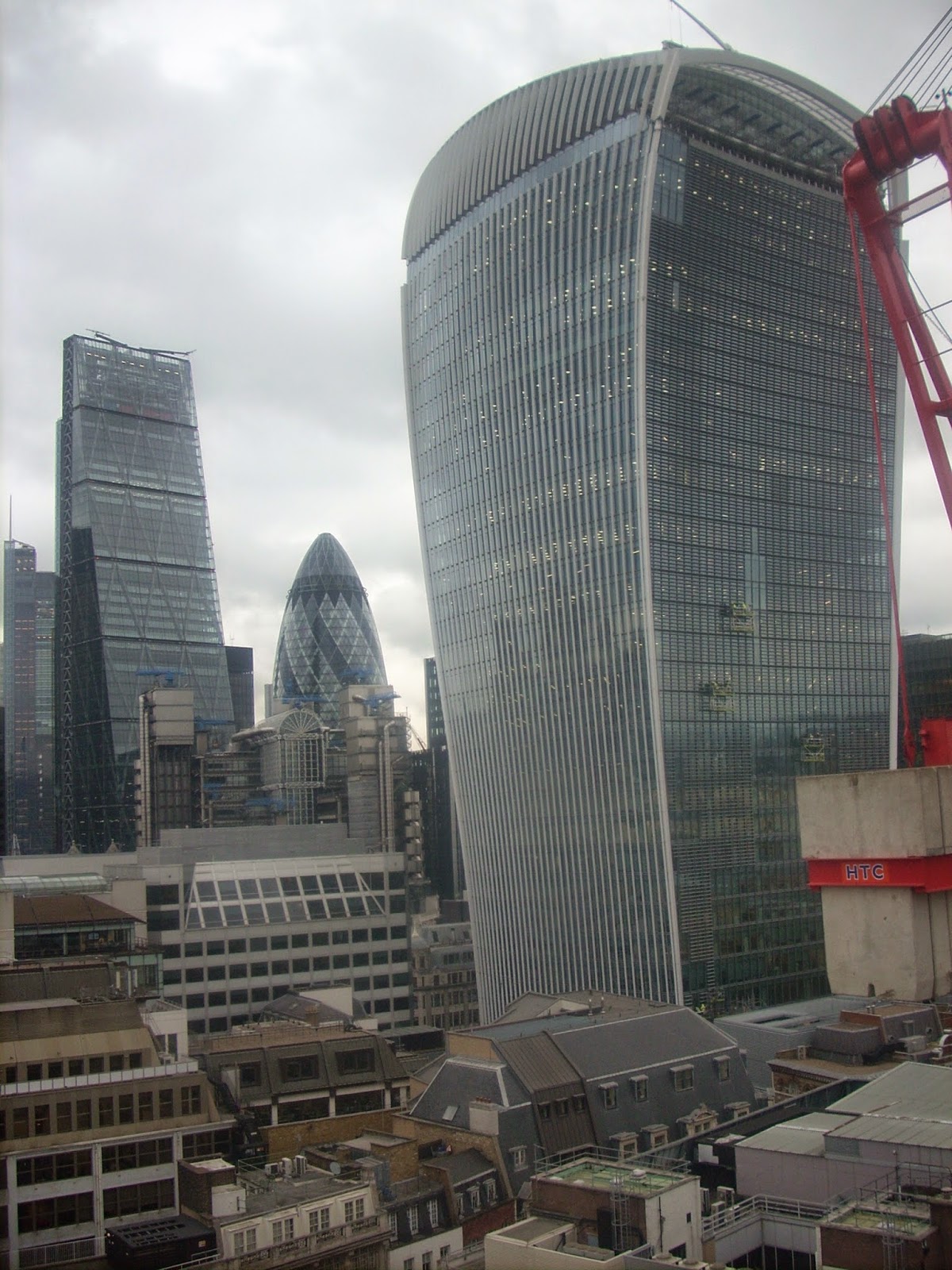 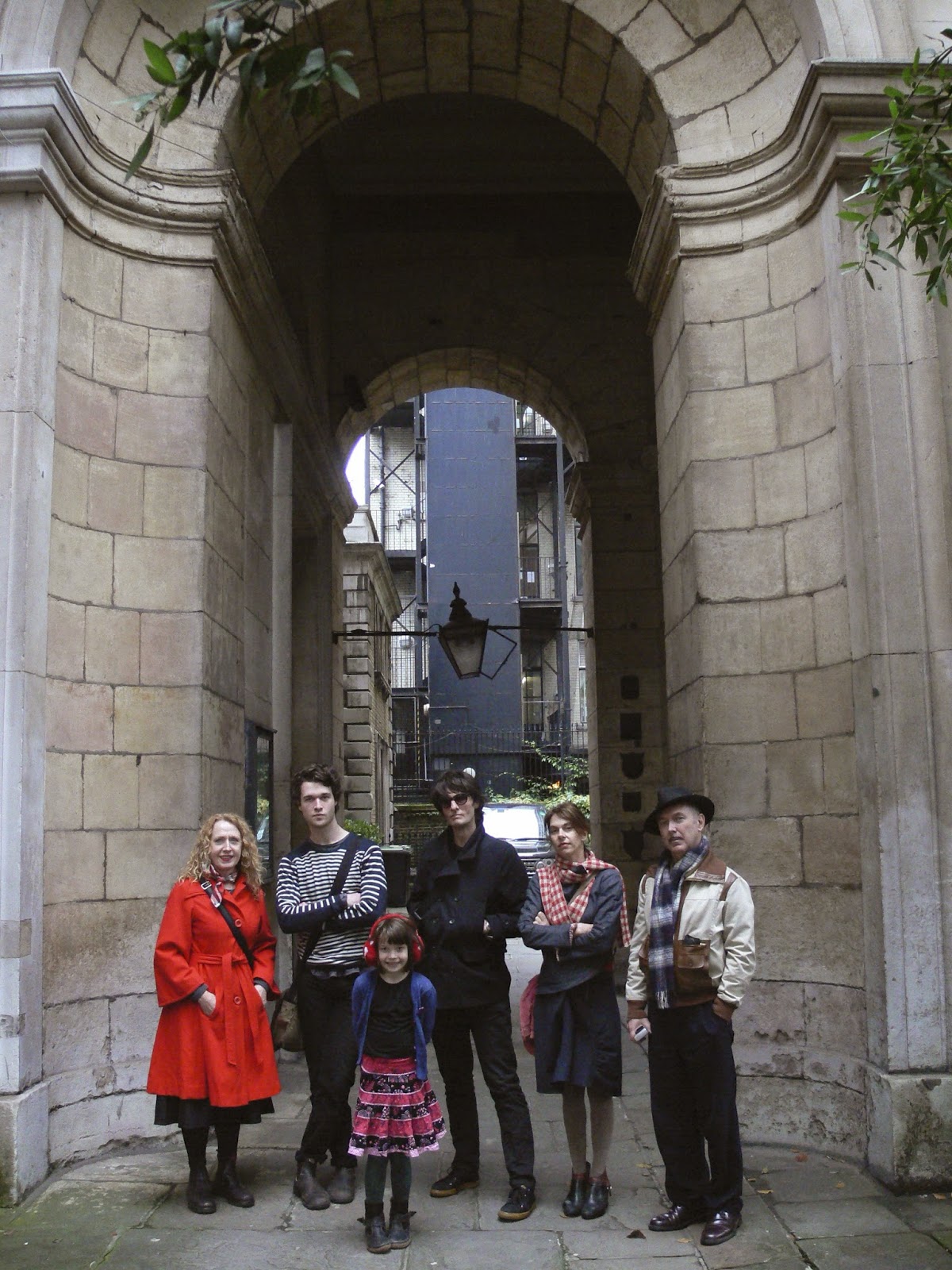 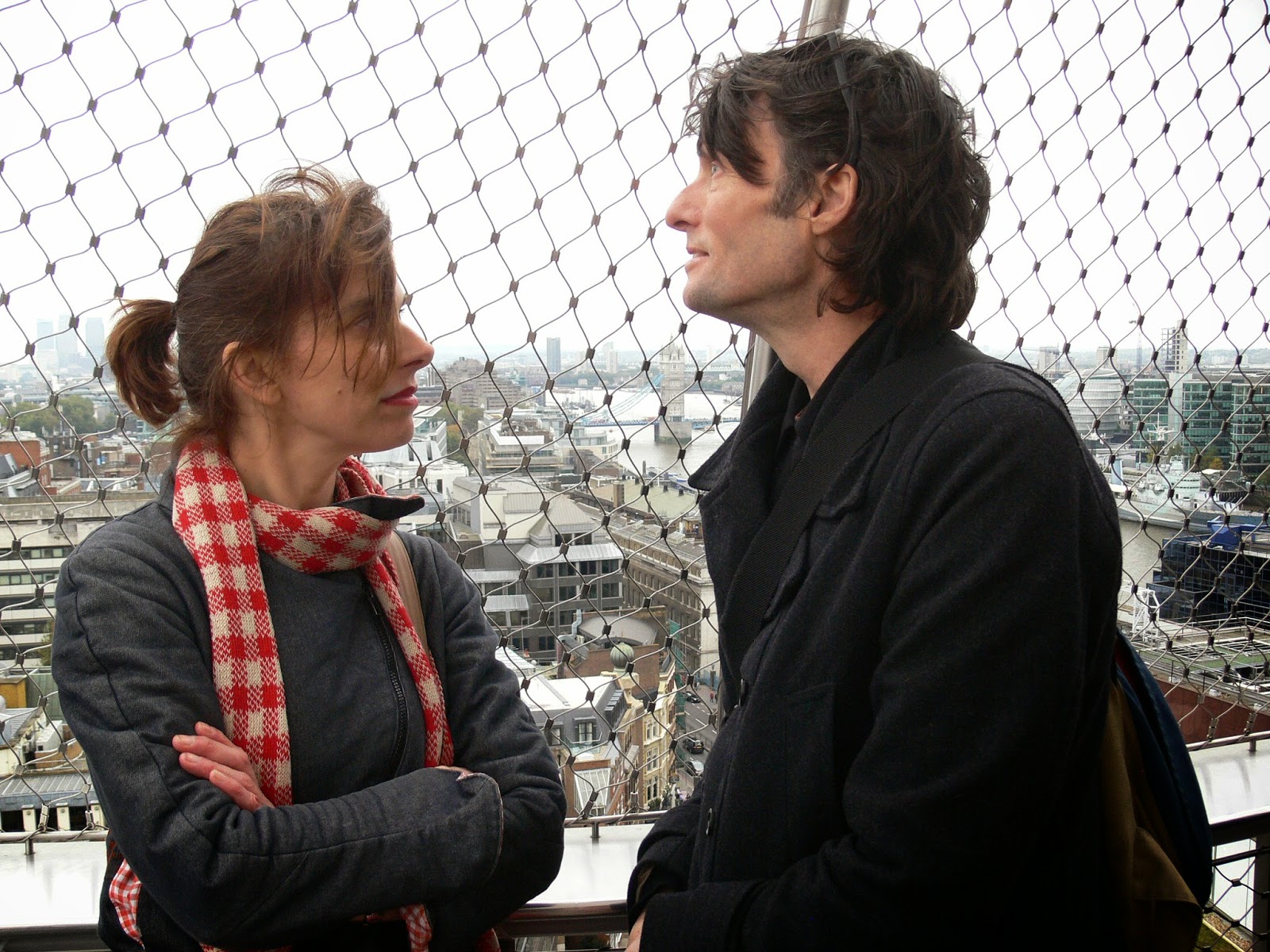 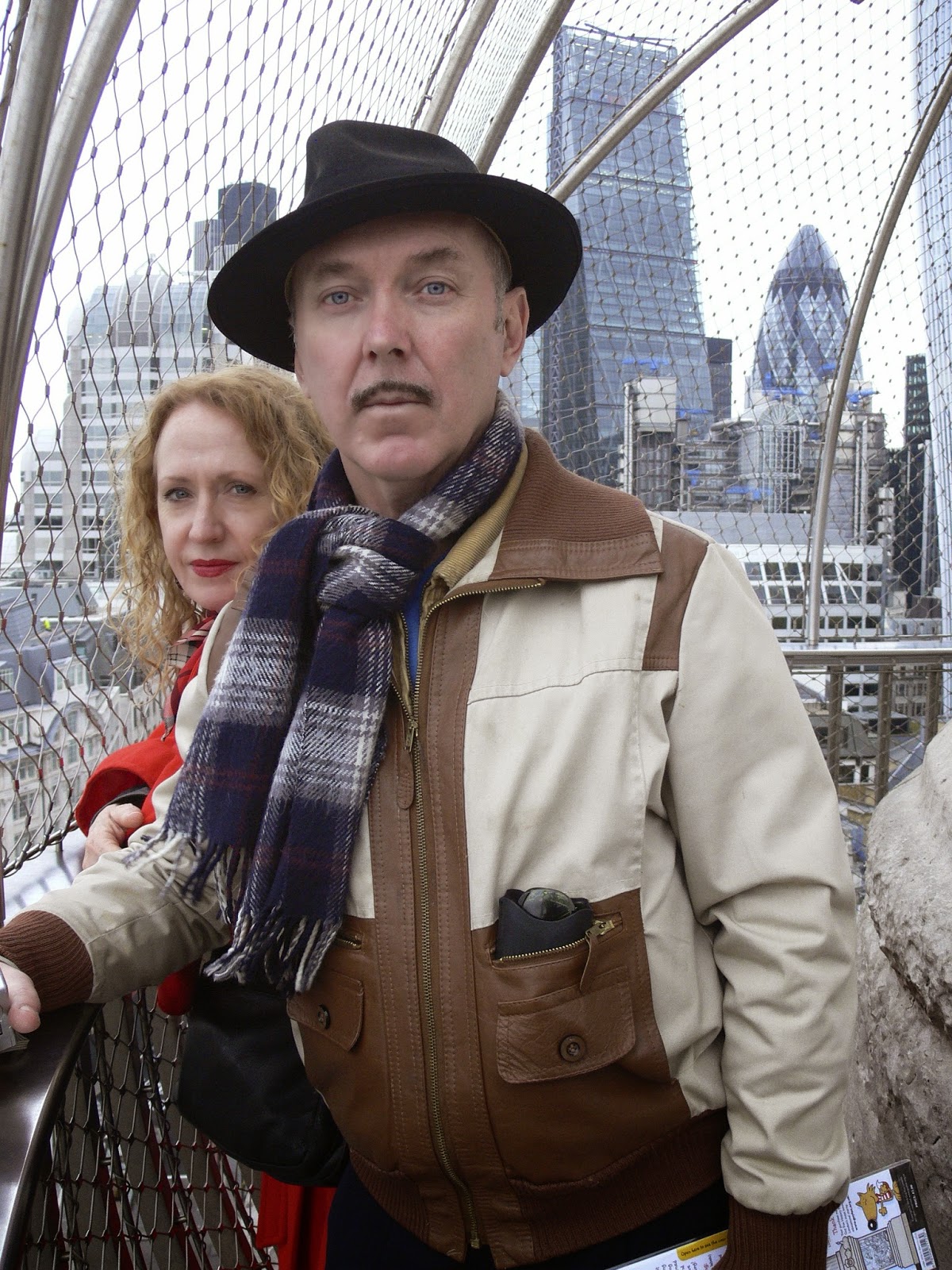 Our first show was at the Windmill Hotel in Brixton on Tuesday the 14th October. It was a double bill with Clare and I doing a duo set first. 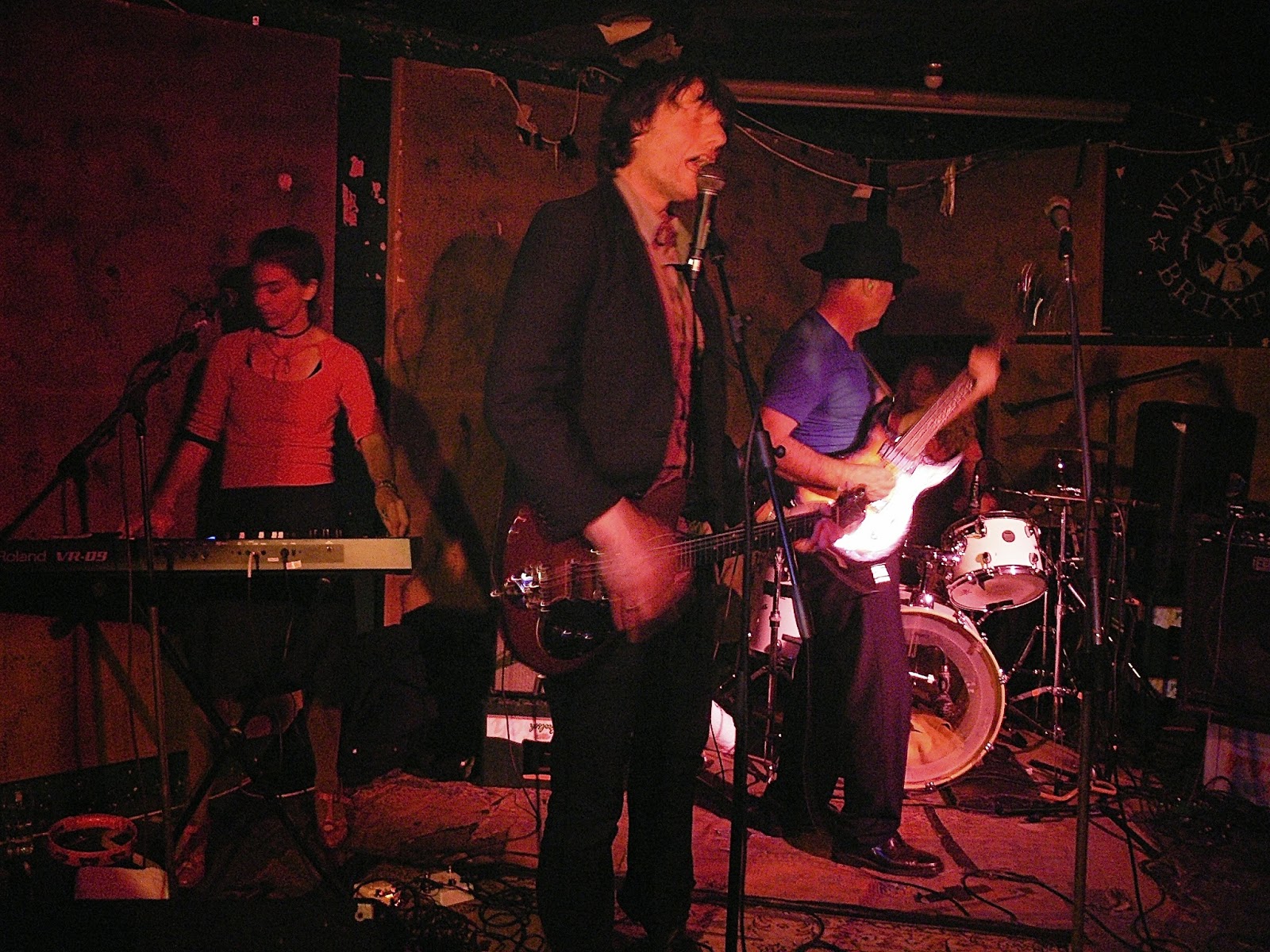 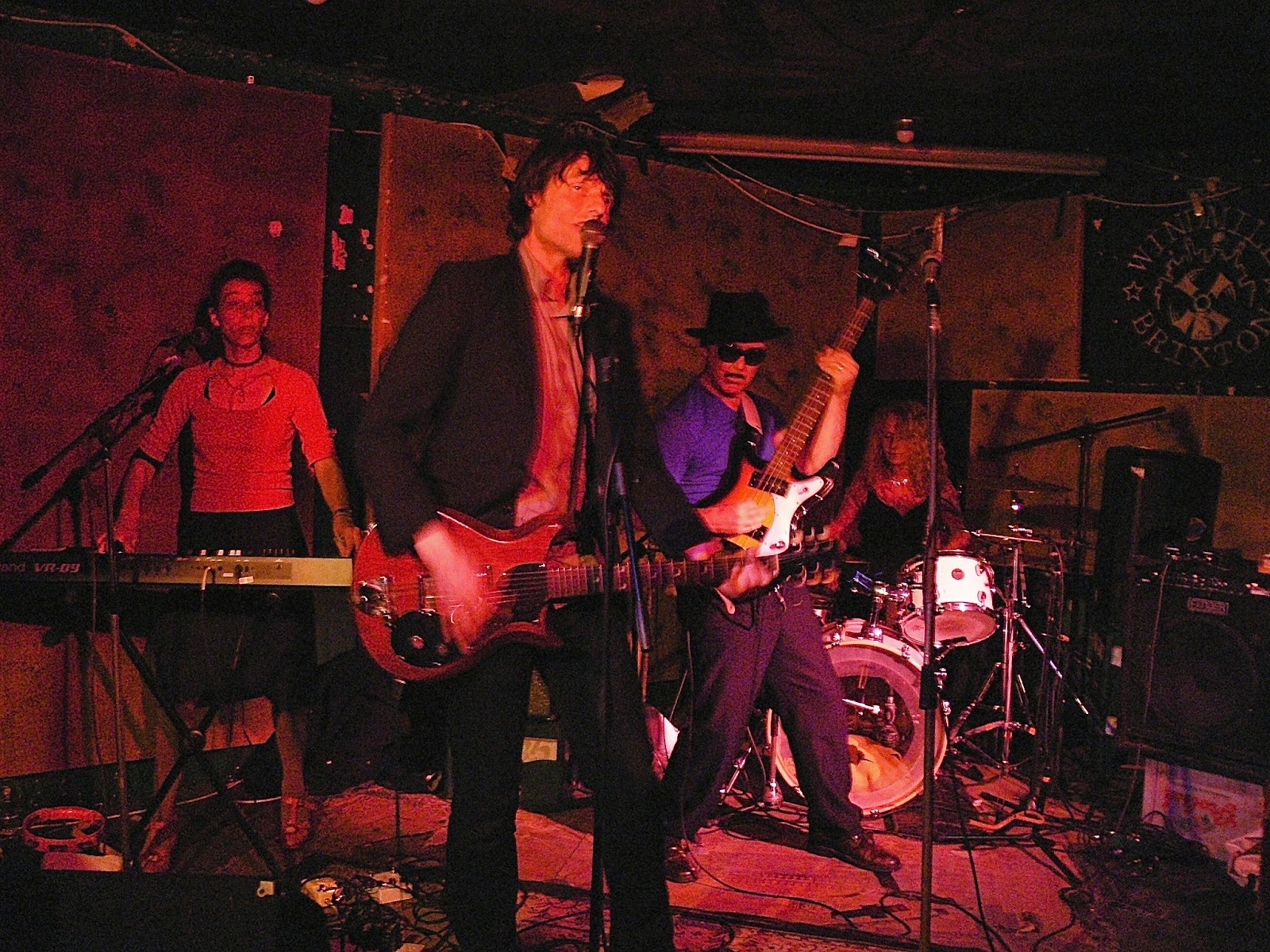 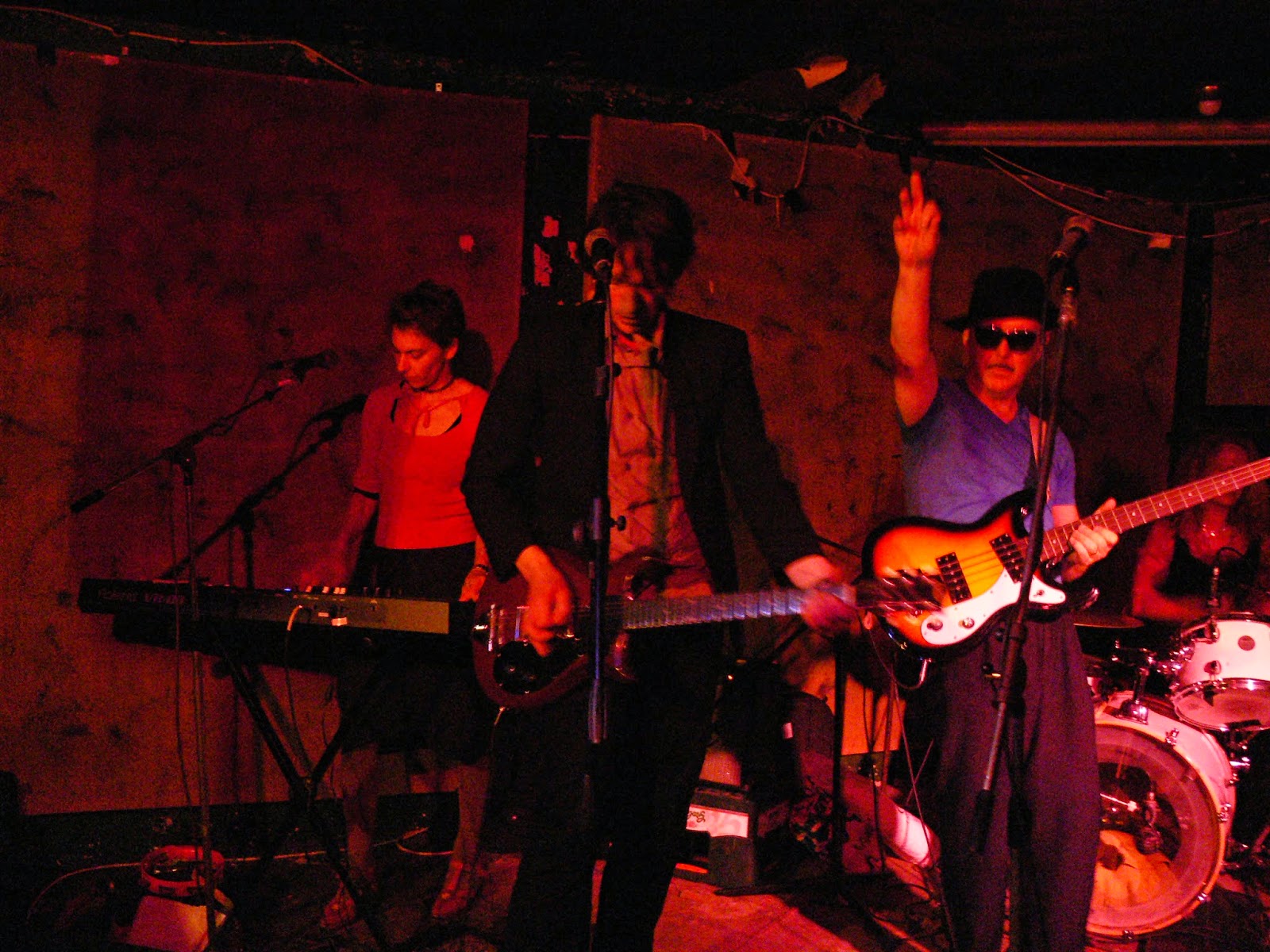 A highlight of the evening was meeting Nick Harper, who played guitar on two tracks on FEARFUL WIGGINGS. We had communicated over the internet but never met. A lovely guy and absolutely amazing musician. 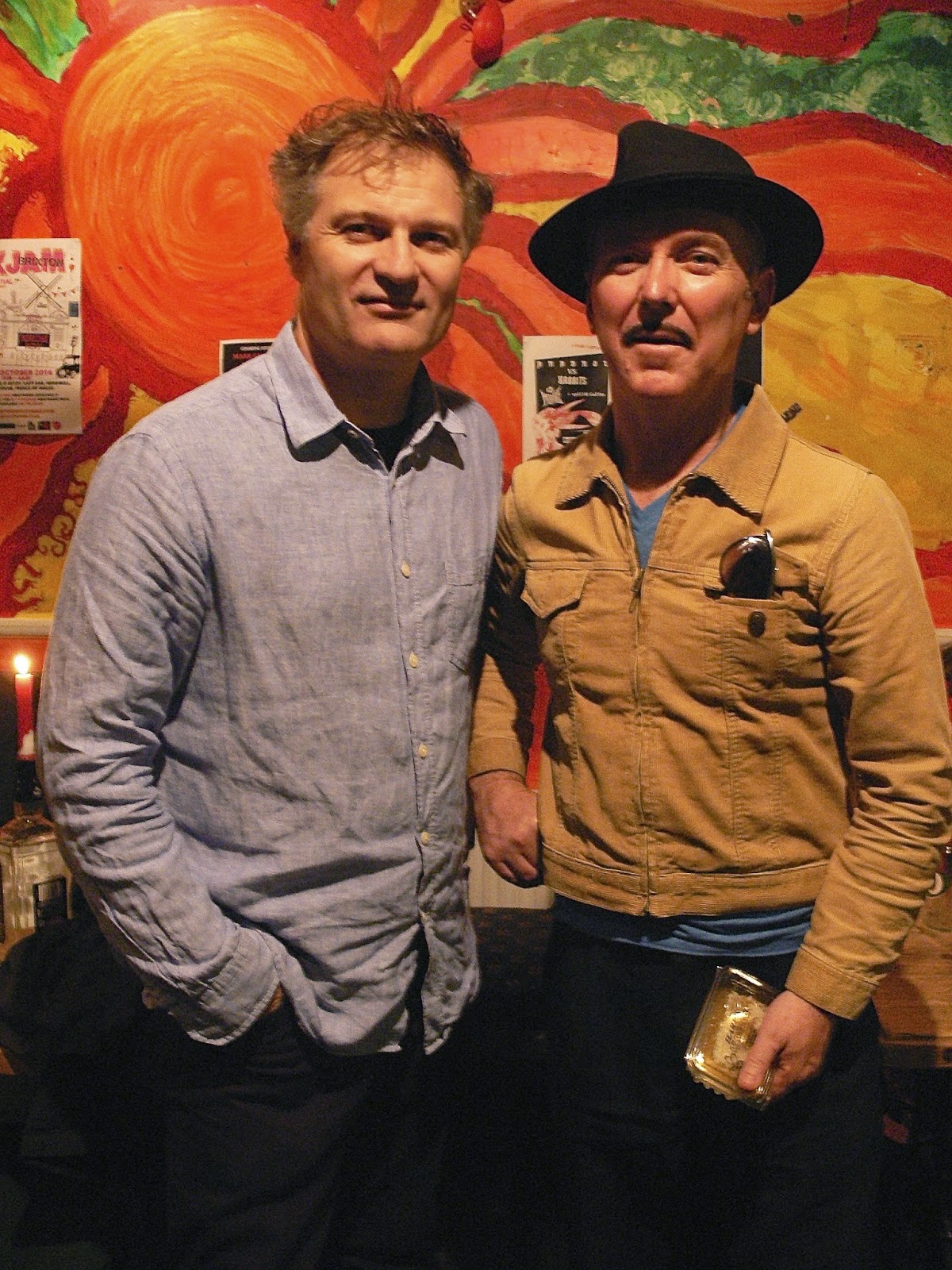 We toured London some more. This is a picture of Clare Moore at the Joseph Beuys room at the Tate, surrounded by iron turds. 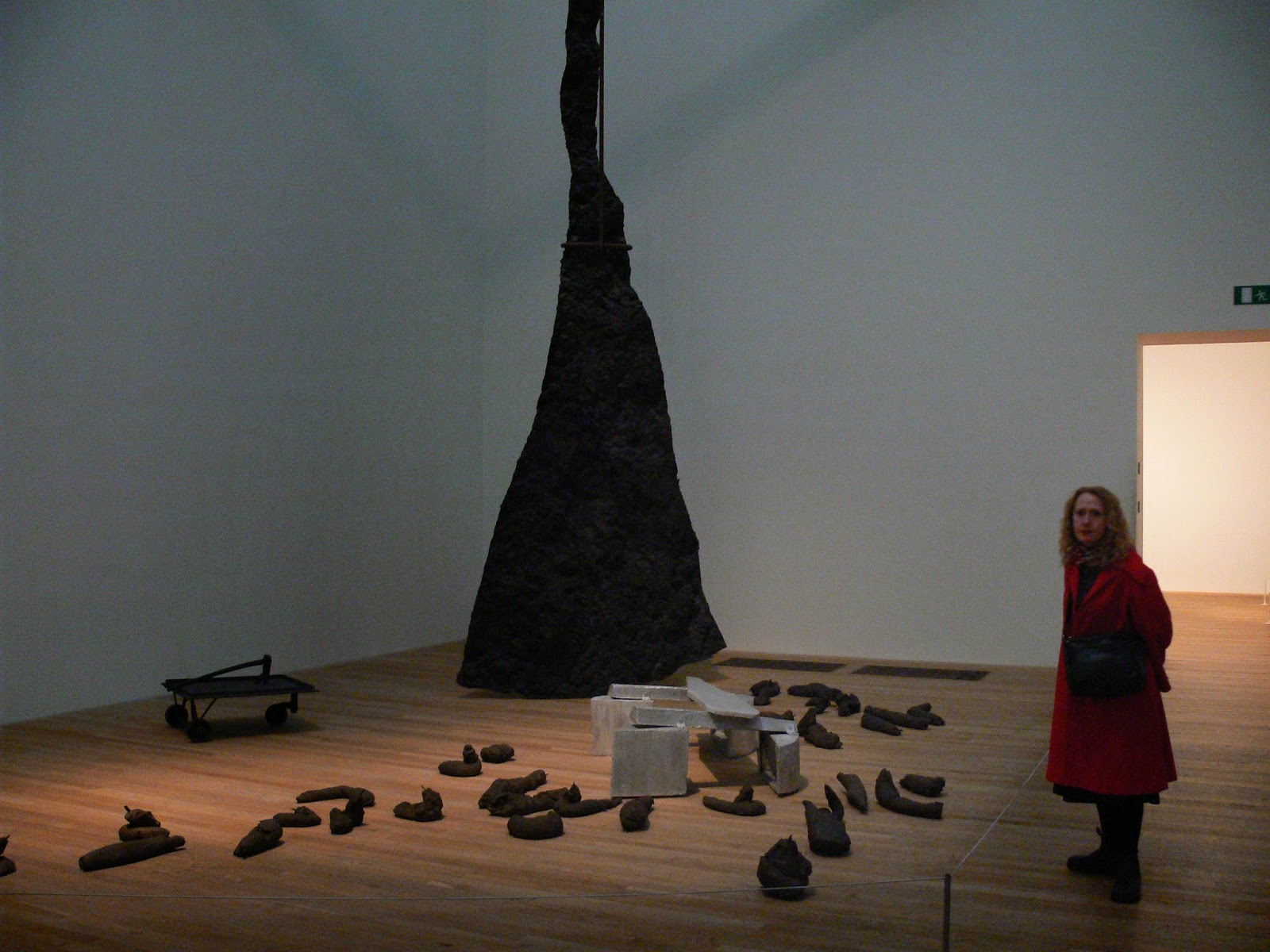