London was quite agreeably warm in early May and we enjoyed the Kings Cross area we were staying in like it was our old manor. Clare and I caught a Stewart lee "work in progress" show at a great little place called "the Comedy Museum" which is underneath a church on High Holborn. It is a small museum with artefacts on the walls and in glass display cases from Spike Milligan, Russ Abbott, Little Tich, Freddie Starr, Bill Bailey and Steptoe and Son - to name a few. Stewart did an amazingly fresh show , reading from notes and "trying out bits" to an audience of about 100 people.

We played for two nights at a small pub in Clerkenwell called the Bestey Trotwood. I had asked around on the internet for information from London people about venues that were not real "industry" type places. Pete Astor - once of the Weather Prophets and the Loft-ssuggested this place.

It was a downstairs caven type affair, like playing in a small folk club. On the first night we played as a three piece and I had some trouble seeing due to sharp led lights.

The treatment we got was very European- very UN London. The man who ran the pub fed us really well and providied great geaar. A real social affair- the amps came in from a shop in Deenmark st and were brought by Andy and Patrick from the Rocking Birds. Joshua, the young man from Brisbane who booked us there, was extra nice as well. A terrific night.

Tony Harris, who engineered the Moodists album "Thirstys Calling" at Livingstone studios in 1983, poked his face into mine between sets. Many old friends. people who knew us from the Moodists and from the very first version of the Coral Snakes in London in the late 80s. People who knew the album "I was the hunter and I was the prey".

On the Friday night we were joined by Malcolm Ross and we played a fantastic show. Totally great sound. Again, the room was packed with comrades from over the decades. People travelled from Bath, Salford and all over London to be there. Had a wonderful time.

Bob Osborne left his spot at the county cricket in Northamptonshire to come to this show as well.

We stayed in London for another two days and caught a comedy show by Bridget Christie at the Water Rats inKings Cross. Lenins fave pub as well as the place where Bob Dylan played his first ever UK gig and where we used to go see teh Pogues in 83, before they recorded their first album.  When the idea of them ever beinga  recording act was mocked and laughed at.

Posted by dave graney at 7:00 AM No comments:

We - well I - drove into Amsterdam and found our accommodation. Such a cute town. So many bikes and pedestrians. They have all the rights of way. Driving the narrow cobblestone streets is tough but its not as anarchic as Paris. Orderly in it's way. More bicycles than I've ever seen, anywhere. Old, cute bicycles that a comic country pastor would ride in a movie. All locked to posts when not needed with huge chains. 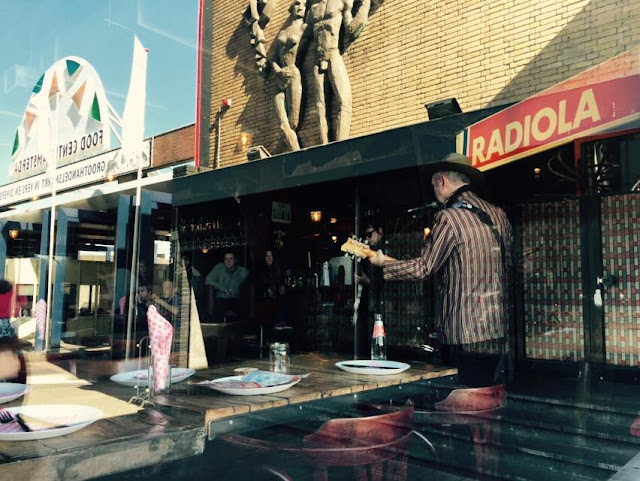 The first show was at a blues bar. Not my natural habitat but we made show. The club owner was anxious to keep the noise at a low level due to a new and vexatious upstairs apartment owner (well - slowly owning all the other apartments) who was offended by the music club he was sleeping above. The club has been there for 30 years.
We kept the volume low and entertained a mixed collection of night life people.
The next day was quite stunning, sun and blue skies over the canals and the boats and bikes.
We played in the afternoon in a barbecue ribs and country music spot. Not our natural habitat but we made show for three sets. Some old friends from Melbourne came along. Also some people from the night before. 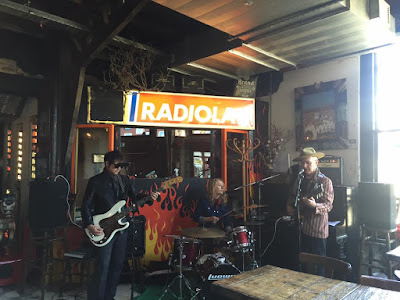 We then drove through Holland and Belgium to Brussels. A bit alarming to see army trucks and soldiers stationed outside the EU buildings as we drove through the centre.
We met up with Georgio "The Dove" Valentino and went along to the venue where we ate and did a short 45 minute set to a very appreciative crowd of music lovers at Cafe CHAFF.  All these shows were played on borrowed equipment and I had the best amp of the tour on this date. A Fender Deluxe Reverb.
We stayed late at the club watching the other band who were kind of indie prog. Nice but a few too many loop pedal tricks for me, I'd rather hear mistakes than perfect loops. 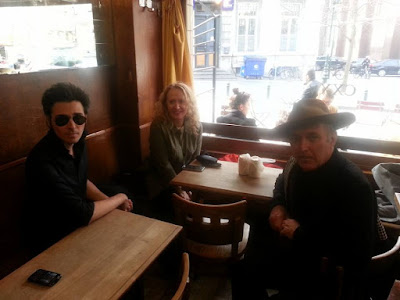 The next day Georgio took us on a  great, sweeping walk through Brussels. Great to have someone who knows history and culture showing you a place like that. We had taken the hire car back and eventually headed to the train station to go to London.

We had work visas and presented our passports. We were an hour early. The British love uniforms and bureaucracy and we ended up getting the train with one minute to spare. Touring is like that, Clare Moore opined. Lots of dead time then a  sudden hair pin bend with heaps of drama and then you fall asleep.

We reached St Pancras station at 5pm and walked to our accommodation.

Playing two nights May 5th and 6th at the Betsey Trotwood in Farringdon rd London.