Baby I Wish I'd Been A Better Pop Star 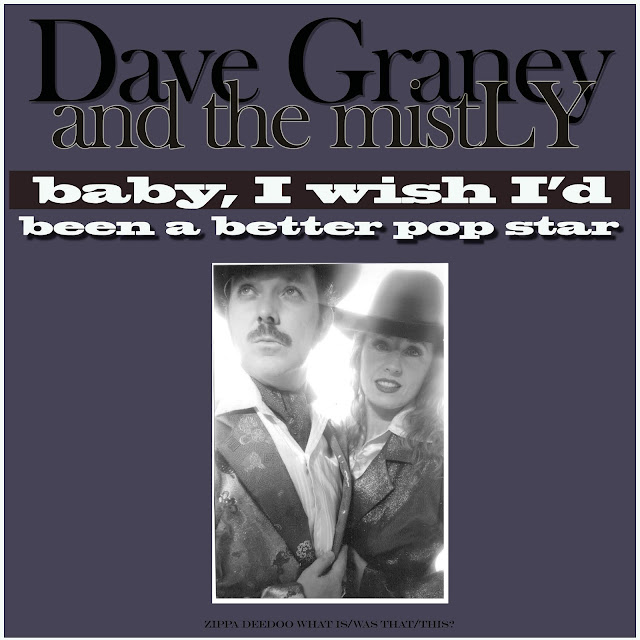 contains a photo by Tony Mahony


Baby I Wish I’d Been A Better Pop Star is the first single from the 2019 album from Dave Graney and the mistLY, ZIPPA DEEDOO WHAT IS/WAS THAT/THIS?

Twelve string guitar, a swinging drumbeat and big glam slashing guitar chords. It starts with a sly groove and bangs straight into a vivid chorus. BABY I WISH I’D BEEN A BETTER POP STAR.

“I could’ve been even more of a bastard!
I coulda really settled some scores!
Kept low/picked my moments/
kept my powder dry and then BAM!!!”
Baby I Wish I’d been A Better Pop Star

Out on CD and digitally in March 2019
Out as a digital album release March 22nd.Pre order the digital album  here at a very low price

The COMPACT DISC version of the album is available via mail order by clicking here...
If you are from outside Ausralia and wish to purchase a Compact Disc of ZIPPA DEEDOO WHAT IS/WAS THAT/THIS? please use this button (different postage)


Baby I Wish I’d Been A Better Pop Star first appeared as it does on Side Z of ZIPPA DEEDOO WHAT IS/WAS THAT/THIS? with me playing all the instruments (except for Clare Moore on drums). Clare suggested we do it with the mistLY and it came over all swinging and bright with pounding toms, pop oomph and zinging twelve string guitars. That was the idea of the album, to have songs done in different styles and tempos.

Okay, there is no book on how to be a good pop star. Are there any good pop stars around? I don't really know.

People have low standards nowadays. A veteran music production friend said to me last night, "what will Ed Sheeran's legacy be? Some big grossing gigs in stadiums, but what standards did he set of his own?"

In my opinion ( I was going to say experience but realized it's never really been a situation for me), to be a pop star you need to be in the middle of a working, coherent music business that is all fussing and dancing around you. And it is only momentarily coherent because of you. Otherwise its just a chaotic scrum.

Personal taste comes into it. As does some sort of generational attitude.

Is a good pop star someone who obeys all the rules and inhabits the recognized forms of music and behaviour the best? Say, all the boys in One Direction?
Or is it the opposite? Jim Morrison?

I have to say I prefer unruly bastards.

Do they work quietly and self sufficiently or create a whole lot of problems that require constant attention from people working for them? Again, in my experience, when I've seen people working with large record companies, (Probably don't exist any more in that style - lots of people involved)  its the latter. People need something to do and a feeling that they are helping to shape something.

A pop star has to be massively poular, in my humble opinion. Across the board access to young minds.

Jim Morrison was that. Shaun Ryder and Kurt Cobain.

Do they thank everybody or say "fuck you" to everybody?  Again, I think the latter is best, though Elvis presley had great manners.

For women, all this is much harder to read. A much smaller gallery of archetypes to draw from. Everybody judges them on a broader societal scale. Drunkenness, druggery and sexual promiscuity. Where is Janis Joplin when people talk about and reissue music by Hendrix, Brian Jones, Tim Buckley, Kurt? And age is harsh on female performers more than their male counterparts. There are few female versions of Van Morrison or David Crosby or Neil Young.

Shows below are by Dave Graney and the mistLY