I started this year by  releasing some digital singles....


I've been doing some shows with the mistLY as well. Been to Adelaide and played around Melbourne.

All the while, the DAMES album was going to be coming out, and that involved rehearsals and gigs. Still going on. Been very enjoyable sitting off to the side playing guitar.
I also made this video for a song from the album, focussing on some of Clare moore's obsessions. Monstertrucks, demolition derbies, apocalyptic abandoned theme parks and the like. It was for the song JUNK TIME...

I also put out a Bandcamp only album of a show we did in 2006 at the Butterfly Club. A "narrative show". POINT BLANK. I was going to do it as one long file but the site couldn't take anything of that size so its two files. Roughly thirteen songs. All written by me and around the story of the heroic battles a performer must take part in to WIN the small piece of stage he wants to live on.

This clip will give you an idea of what the show was like. NO MICS. Just singing into the room.

This Black and White clip is from different season of the show.


I'll be putting up the sequel to POINT BLANK, LIVE IN HELL.  pretty soon.

There was also the BandCamp release of THE SOUNDTRACK TO THE MOVIE JOHNNY GHOST by Donna McRae.  A film which Donna has pushed around the world and, after more than a year , may get an Australian screening soon! (Its been very inspiring watching Donnas committment to the film.)


In the midst of this we rehearsed and recorded an album for Harry Howard and the NDE.
At the session Clare and I LEARNED six or so songs just before they were recorded. (I play the bass) It was an intense couple of days. the album is very, very good. Harrys songs are stellar. Edwina is a formidable performer. We're playing a lot of shows. Hopefully into 2014 and also hopefully to Europe. I shot this clip on my toy video camera and edited it in iMovie.


Saturday Nov 16th, dave graney and the mistLY will be playing A DAY ON THE GREEN in Kings Park Perth WA w/ Hoodoo Gurus,You Am I and the Whitlams.
Friday Nov 22nd harry Howard and the NDE - THE METRO HOTEL IN ADELAIDE
Thursday Nov 28th THE DAMES will be playing at the RETREAT HOTEL in Sydney Rd Brunswick.
Saturday 7th December THE DAMES will be at the Great Britain Hotel in Richmond.

Friday 13th Decemberthe DAMES will be at the RED RATTLER in MARRICKVILLE, Sydney on a great double bill with HARRY HOWARD and the NDE. 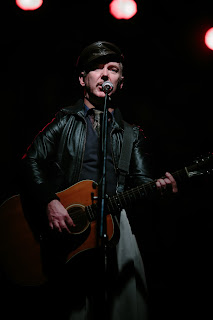 This photo is from a show at the VANGUARD in Sydney earlier in the year. My guitar strap broke mid song and fell to DEE DEE RAMONE levels. As you can see it made my head expand terribly and also my hands. Like I'm in that SUPERGRASS clip.
Posted by dave graney at 3:13 AM 2 comments: