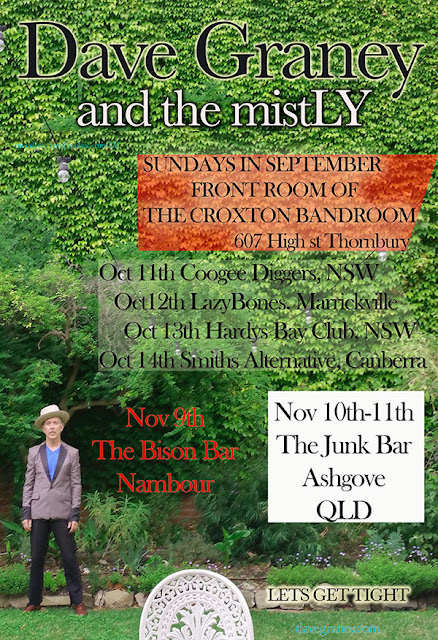 Well its been a long and mean winter. Here in the hills it's been pretty dry but exceptionally windy and cold. Being surrounded by tall trees a persons mind listens for crashing Mountain ash or gumtree branches to fall. It happens pretty spectacularly around the neighbourhood. And did for a poor family a few houses up.

On the flip side however, our nine week stint in the front room of the Croxton Bandroom in April May was so inspiring and energizing that we are going back there for every Sunday 4-6pm in September. All the shows have been so positive this year, I’ve been enjoying playing with the mistLY so much. I feel like I’ve finally become what I’ve always wanted to be which is a kind of Elektra period electric r&b singer songwriter with an absolute CRACK band. Its all come together.

Our shows in Adelaide were a treat. Three sold out nights at the Wheatsheaf. We played a wide range of songs, some unrecorded and a lot from the Post Coral Snakes period. But we played two 60 minute sets each night so the shows drifted all over the roads, the main street and many byways down by the side as well. 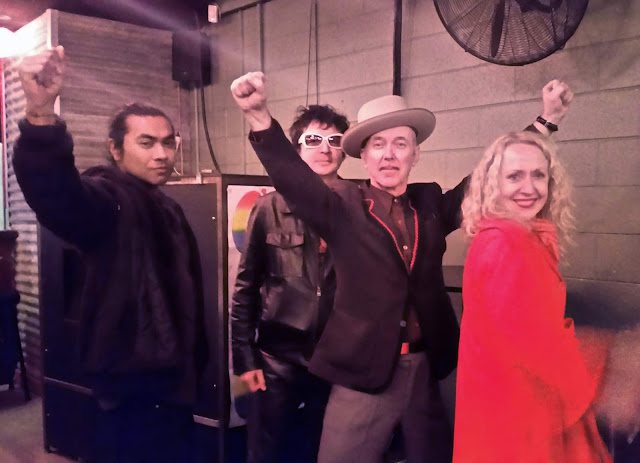 I picked up a new hat this young fellow made for me. Blakesby Hats. The man that makes them is  one living ornament to a mid century American ideal. 19th or 20th century - hard to pick. Living there in a beige brick Adelaide suburban street. He looks a bit overdone in this clip but its a year or so ago and you know how far someone in their early twenties can go in that period. LIGHT YEARS! 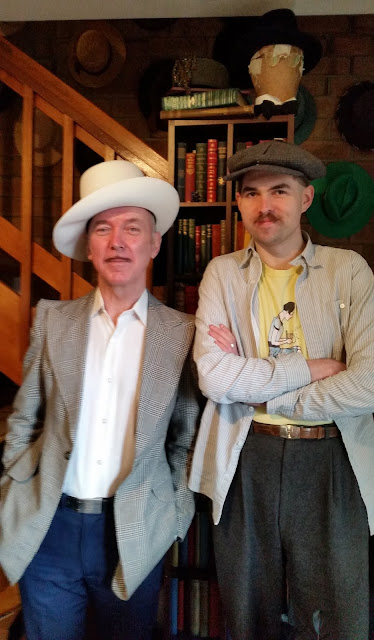 Our guitarist Stuart Perera lost his mother at the start of the year.  Then Brian Moore left us in February and Moya Moore in July. Clare had been helping our elderly neighbour into Aged care for most of the last year and she died suddenly in early August. Brian Hooper from the Surrealists and the Beasts went down and then it was Spencer P Jones. We have also been spending time when allowed with a gravely ill friend. A rough year on that front.

One that hit really hard was a character and friend whose been coming to see us play in Sydney since the late 80s and probably earlier. Chris Fay. Sudden death. One of those things that really takes the wind out of you. He was always showing up at our gigs, talking a mile a minute. He'd sometimes turn up after we'd played with wild stories of his mad commute. On his bicycle. He'd always be asking if he could help with gear but we'd always beg off as he was really never any help.  He was a funny charmer. Seemed to live quite harshly, for a long time in a hostel taking care of all these busted old blokes who'd washed up there. Chris was there when times were fat and lean, high and low. I remember playing the Annandale in 1990 or 1991 and we were talking in the bar off to the side. Well I was listening to his mad tales. The Coral Snakes were on stage and starting up a song, vamping it. Just when Lure Of the Tropics was coming out. I walked to the stage with Chris in my ear and then just jumped up sang into the mic. Never had that smooth shift from OFF to ON happen so quickly.
A few years later we were chilling after a big show in a  bandroom at the Metro, me Clare Moore, Chris and Dave Wray aka Frank Bennett. Dave suddenly said "c'mon dave, lets go get some hookers and some blow!" Chris looked at me and Clare and said "Isn't it funny how Dave always says exactly what everybodys thinking!"

Thats him in the middle with Clinton walker on the left and Robin Casinader (rare shot with beer can) on the right. Sydney early 90s. 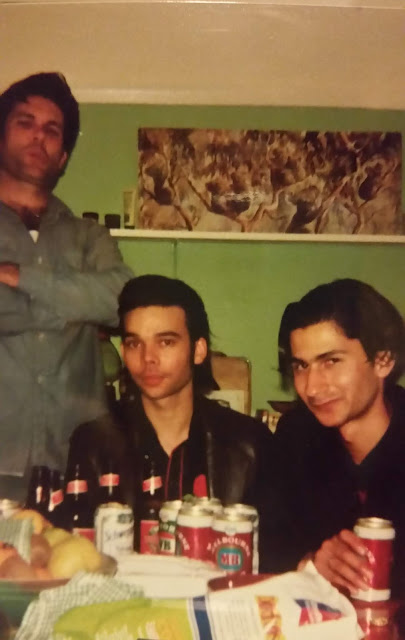 In 1995 or 96 we did shows in Melbourne and Sydney where we wanted to have Jim Morrison supporting us . (We had a  song on the Soft N Sexy Sound called Morrison Floorshow about Jim coming back from the dead and joining a  tribute band to the Doors) . I just wanted to have "Jim Morrison (unplugged)" on our posters. 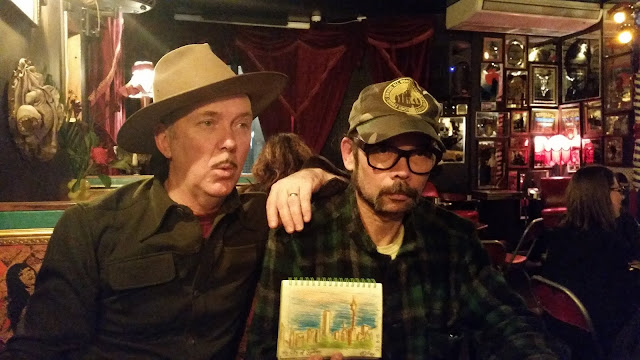 In Melbourne Malcolm Hill did a spot as "Revolutionary Jim", coming on and haranguing the crowd to "love my ass!"

Chris stumbled onto the stage at the Metro in Sydney as "Drunk Jim" in enormous mirror shades and leather pants and mumbled his way through some key lines, entangling himself hopelessly in mic leads and knocking stands over. People got really upset, yelling "You're not Jim!". It was a triumph, in my rarely humble opinion. 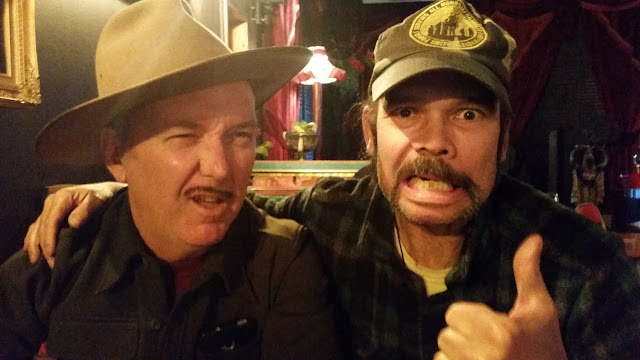 He also told stories of being asked to be in a  Birthday Party tribute band called THE BIRTHDAY PARTY BOYS.  He declined as he thought it would be uncool but I always loved the idea. 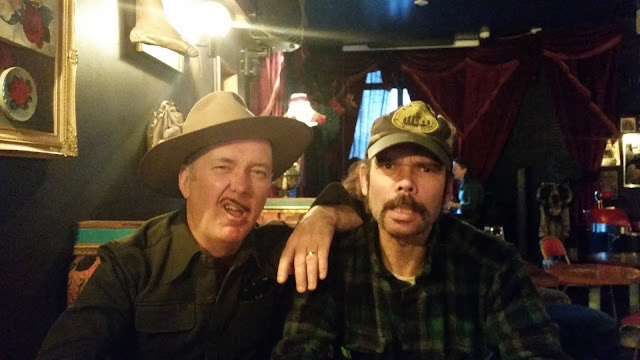 Many times we gave him a  lift back from a show with him directing us through his city of Sydney, getting lost in conversation in the back or distracted or simply seeming to want to show us something that was miles off our course. Then just getting us lost. 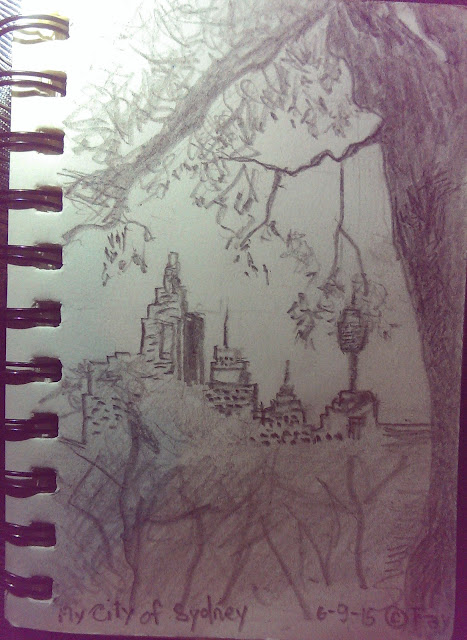 About four years ago we stopped for late night food on such a drive around Sydney, myself and Clare and Chris. We ate Falafel. As he got out of the back door we all stared at the Houmous, Tabouli and salad strewn all over the bench seat where he'd been the only one sitting. "That was not me!" he declared in wide eyed innocence and indignation. "That was not me!" . Eventually, like somebody said, you just went with the chaos.

He did the occasional acting job on stage and for film and was always sketching people in his pad. 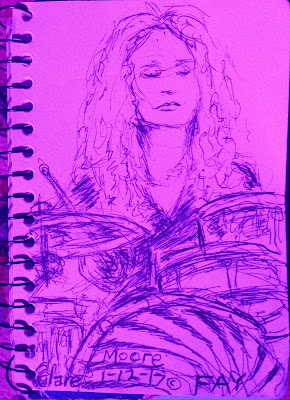 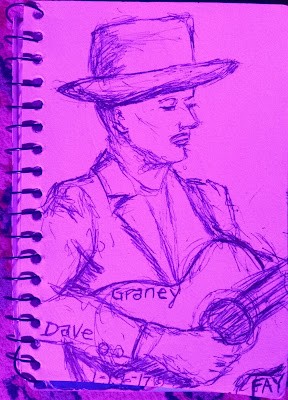 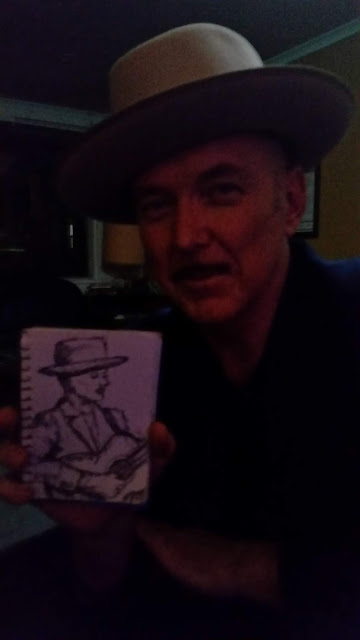 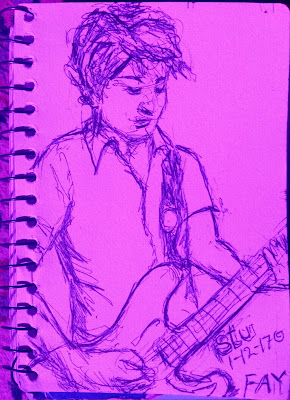 We have shows coming up in Melbourne, Sydney, Canberra, the Central Coast , Nambour on the Sunshine Coast and Brisbane . Bring it all on! 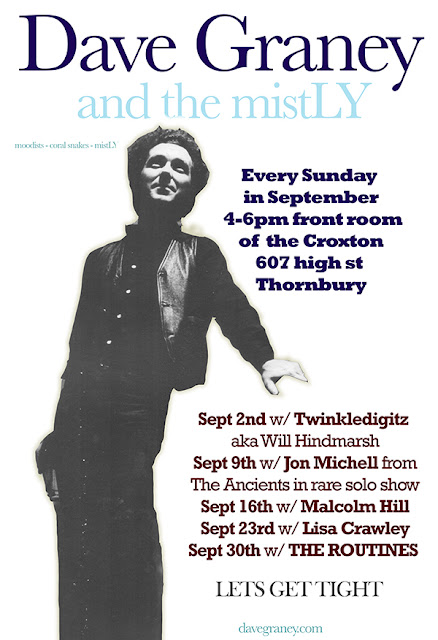