this was published in a recent issue of the Melbourne Review 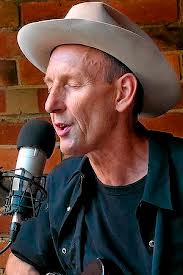 Posted by dave graney at 6:31 PM No comments:

Loved playing in Perth and Fremantle and the show at the Red rattler was a blast. Great venue!
Band is playing at a high level of match fitness. One more show for this tour and then we'll be reloading in some way.

We'll be playing with the Dames who are Clare Moore oin drums, Kaye Louise Patterson on piano and Rosie Westbrook on bass. They have been working on an album foir abouta  year and threaten to release it soon. For live shows they are joined by Will Hindmarsh on laptop and keys and myself on guitar.

The last gig we did was an acoustic spot at a  bookshop in Canberra. Played my K Yairi 12 string and Clare played some percussion and sang. Had  great time. Will be doing more of that.

Posted by dave graney at 6:15 PM No comments:

Clare "Mooresy" Moore, slamming the drums, Stu "thommo" Thomas pumping the bass , Stuart "pez" Perera blazing his left handed Rickenbacker and Dave "david" Graney chiming his chinese made electric 12 string. dave graney and the mistLY come from the clouds. An abstract songwriter with a band who can lay down a  crude and filthy boogie, they play few ballads. Its all on the UpBeat. They are not a green band. Not ecologically minded. They like throwaway, ephemeral stuff. Silly, goofy and stupid being more highly prized than worthiness and classicism. They like suspense. Suspension. Flat fives also. Dave Graneys fave movie of 2012 is the Farrelly Bros "the three stooges".

Dave Graney is associated with words and stories but people coming to the mistLY shows get a  spectacular twin guitar and groove jam. Stuart Perera on the Rickenbacker has skills and chops like no other. This ain't indie rock! Clare Moore and Stu Thomas on drums and bass set up a rhythm section like nothing else on the scene. High energy all around.

They've been playing in dinner and show joints but the plates are shaking , the wine glasses are cracking and the clothes are getting ruined with the dancing and the only thing that fits is the weird chordings that help people digest all that posh food. So dave graney and the mistLY are playing in a music place- forget the food. The Red Rattler in Marrickville. With their pals from far western sydney - the Holy Soul. (actually theres a great kebab trailer just outside-good enough for the late night cab drivers!)

How do they fit in the current scene? Its like Steely Dan or Little Feat was out there playing the circuit! For real! Its a West Coast thing!
new album "you've been in my mind" out on Cockaigne (Cock21) and live dates are happening NOW....

(yeah, on the way home, dave is stoppin' to do a  solo show/ reading at this great new venue in Canberra)

See a great new clip for "we need a champion" here.Made by young Melbourne film maker Nick Cowans. Its a dance off a la SOUL TRAIN. Dave Graney wins because he wrote the song and rigged the whole thing to drop his way.
http://youtu.be/G7yLv4uMMKE


This tour is supported by the Victorian Government through Arts Victoria

dave graney and the mistLY are out on tour behind their new disc "you've been in my mind" . Its a rock'n'roll set powered

by drums ,bass, 12 and 6 string electric guitars and lashings of vocals. Dave calls it "west coast" in its chordings and beats
as thats the kind of 70s rock he was raised in. We are talking about Love and the Doors and the Byrds kind of "west coast".
Songs like "flash in the pantz", "blues negative", "cop this,sweetly" ,"midnight cats" and "playin' chicken". The album is upbeat and taut but
includes "quiet storm" moments like "lifes a dream" and "I'm not the guy I tried to be". Out now on itunes and in the shops.

"It’s all worth the evening — busted shoes, city munters, a missing twenty-dollar note — when the band finish the main set with Mt Gambier Night, distilling all of The MistLY’s exercises in poise and restraint into four compressed minutes. It’s exceptionally beautiful: still quite pop, but with a layered density.

After pretending they’re not going to do an encore, Graney & co close the night with Rock & Roll is Where I Hide. It crackles over with dangerous energy, Graney delivering his prose with a sneering cadence, and it hits its theme too well: Tinker-Tailor-Spy, this is not a real person you’re looking at.

Podcast of a recent interview with Dave Graney on Radio National
http://www.abc.net.au/radionational/programs/weekendarts/dave-graney/4247132

Genius UK comedian Stewart Lee reviews YBIMM for the Sunday Times
"The older the listener gets the more sense the gnomic beatnik platitudes of Dave Graney, the Lee Hazelwood of suburban Melbourne, make; functional philosophy, crooned over coiled leads and funk-footed rhythms.
Transcending his punk past, and his subsequent immersions in the various genre fictions of country, lounge and songwriter styles, Graney sculpts the slick Seventies rock of his youth, unsentimentally anatomized in the pin-sharp recitation Mt Gambier Nights, into a series of sparkling as-live sides.
Ventriloquising various delusional deadbeats, or hidden in deep cover self-mythologising, Graney quietly releases another late career classic into the wild".
http://www.stewartlee.co.uk/album_review_archive/g-graney_dave-youve_been_in_my_mind.htm

"Naturally, the songs are superb: ‘Flash In The Pantz’, ‘We Need A Champion’, ‘Cop This, Sweetly”, the weirdly nostalgic ‘Mt Gambier Night’, the aforementioned ‘King Of The Dudes’ and the self-effacing closer ‘I’m Not The Guy I Tried To Be’ are all vintage DG nuggets. As ever, Graney disperses sneering “ooh”s and lascivious “mmm”s between his savage witticisms, all the while playing the jazziest 12-string electric guitar since Roger McGuinn’s ‘Eight Miles High’ Coltrane-isms. The top-notch accompaniment is likewise a familiar delight, with Clare Moore effortlessly switching between rhythm patterns, Stu Thomas – who might just be one of the finest white bass players in this land – maintaining the swing, and Stu Perera taking his left-handed Rickenbacker for a walk in areas Nels Cline has yet to tread.
Never a flash in the pan, Dave Graney again proves he isn’t the kind of an artist who’ll be on your mind after you’ve absorbed his tonne-weighing shtick. Instead, he’ll be in your mind".
Denis Semchenko - The BRAG

"Self-recorded and mixed, with help from engineer Andrew “Idge” Hehir, the performances are mostly live, not overdubbed, reassuringly-immediate and seemingly in thrall to ’70s production values, as if Tony Visconti was at the desk in their Brunswick studio. The piercing sustain of the guitars is thin and trebly, while the choruses of ‘I’m Not the Guy I Try To Be’, ‘Field Record Me’ and ‘Cop This Sweetly’ - great titles, as usual - flow in a wash of harmonies that could have come from Bowie and Osterburg’s own throats in Hansa Studios in 1976; the latter track even ending with desperate yelps like The Idiot’s ‘Funtime’.
While the first half is upbeat and mid-paced, the second drops to a slower, dreamier cadence. Songs like ‘Playing Chicken’, ‘I’m Not the Guy I Try to Be’ and ‘Midnight Cats’ are made for the early hours. The spoken-word ‘Mt Gambier Nights’ is autobiography melded with dry observation, quoting William Blake to an evocative backdrop of staccato guitar reverb.
This is a seductive and comfortably re-playable collection of dependable material, boding well for an extensive national tour this month".
by Aaron Curran MESS AND NOISE 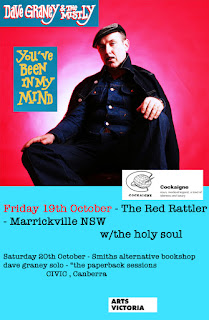 Posted by dave graney at 6:29 PM No comments: