then a party deep in the hills!

Jesus! Cold and wet, could see your breath. Headed off to do a  gig in a restaurant in the Hills at about 9pm. The bar had been open since 4pm... We expected a harsh time of it! I dressed appropriately. I wuz gonna die in all kindsa patterns and with red strides an' white shoes too 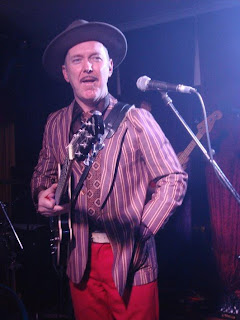 Beats playing to bearded dopes who have just heard Johnny Cash though.
A young trio were playing as we arrived. Very flash and confident guitar player. they all smiled and raved their way through every hit of the 80s and 90s! A cute young jukebox! The dancefloor was full of woman shaking everything they had to all these radio monsters.
We had to follow this.
We set up and the dry ice set the scene and I told 'em the party was over and we were about to ruin their evening. "Go bother the fellow who booked us!" I advised. 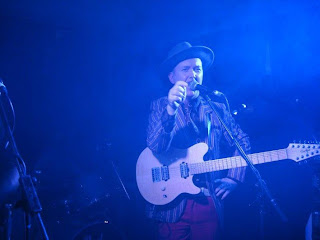 We then tore it up for a good hour and three quarters or so. 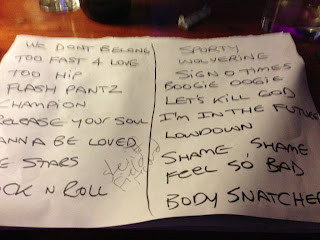 Yeah we threw in some dynamite disco tunes that night! The party went up another few notches. We drove 'em crazy! 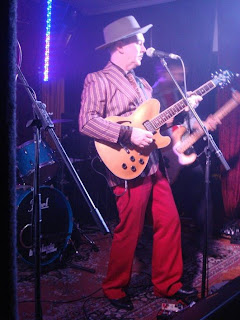 Every friday evening in september dave graney will be playing an acoustic solo set at the Cornish Arms in Sydney rd Brunswick.

what were those recent shows like? POW St Kilda

Dave Graney and the Coral Snakes fought many heroic battles in the smaller upstairs piano bar of this hotel. Friends we knew worked there. The Moodists played there in 1985. I think PBS even started upstairs there in the 80s. It was a fine , dodgy establishment. Much more the home of st Kilda weirdness old school variety than the Esplanade. Though nothing like Joeys and the Linden Tree. You could wander in to that piano bar any time of day or night and slide into a  booth and meet some likely types.
The front bar was, and still is, a last bastion of that St Kilda weirdness. (Along with the Bowling club up the road) They have started putting on bands there which is a  cool thing.
The upstairs , where that piano bar used to be, is a fancy restaurant and the small front , public bar has had to install noise cancelling stuff in the old disused fireplaces and other parts of the walls to not disturb the fine diners. While bands play, the front door has to be boarded up as well. This is in a  pub on the corner of Fitzroy and Acland streets, with trams rattling down there constantly. Why is music so annoying to people?

We played two sets to old friends and the types of blow-ins that St Kilda has always attracted. people from out of town came to see the show. St Kilda is known all over the country as a shady suburb. A couple of streets where people can lose their shame. What is it with these dills who move there for a  good nights sleep?

Between sets, three pilled up young dudes walked on to the stage and put our guitars on. Posing silently as if in their own video. The security chased them. One pulled out his cock as he walked off.
Nobody died. 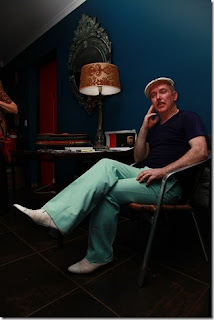 Every friday evening in september dave graney will be playing an acoustic solo set at the Cornish Arms in Sydney rd Brunswick.
Posted by dave graney at 9:19 PM 1 comment:

I'm connected to these dopey internet music related sites that keep asking as to how shows went. So as I can fill the site with more stuff and act like everythings happening properly. I never do it, so I thought I should. But here instead of there.

Darwin was a lovely, warm place to visit in the midst of a  very cold winter. The ABC radio in Darwin, like Hobart, seems so switched ON to music and the experience of it when compared to the local stations in Melbourne and Sydney. In the bigger places they seem so scared of upsetting their audience.

Stayed in an area called PARAP, which is where the gig was as well. The Railway Workers Club. We'd played there in 2011. A great, old school room with a very good sound tech. Old school guy who just knows how to set up stuff with no fuss and GETS it done. Also plays great music over the system. I mean prog and exotica when we were there. Tull and Les Baxter.
Stu Thomas did a solo set there the night before we played. the Stu Thomas Paradox. 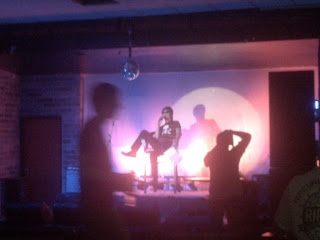 The opening act on the night we played was a nice fellow who played acoustic styles in a  latin kind of way and who turned out be a religious minister. With dreads. See, its interesting in the North. We played one set. A lot from our new albun, a few older songs, and had a  great time. The backline was provided for us and I used a Fender Concert series amp which I didn't really like but coped somehow... 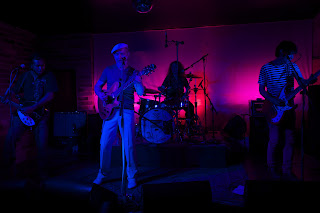 We ate some lovely tropical , northern food and spent a day at Berry Springs, which is a short, 45 minute from Darwin. 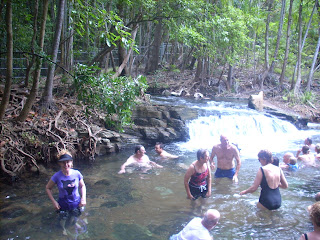 There were crocodiles, of course, but only FRESHIES. 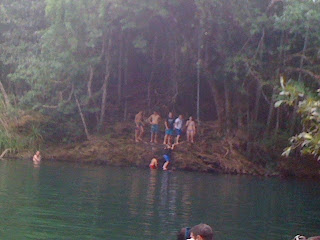 On the way to the springs we stopped at the HUMPTY DOO HOTEL, which had been suggested as a joint we could perform in. 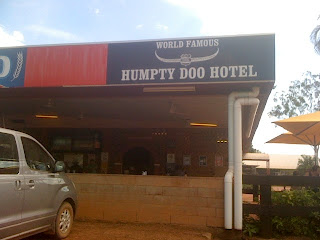 I was at the bar (daytime) when Stu Thomas asked what sort of sparkling wine they had. I rolled my eyes at the barmaid so as to suggest that he was not with me as I ordered a refreshing lemonade to go with my barramundi burger. I took a  table outside, sharing it with some rugged northerners. Stu sat down and commented loudly that it was great to have a cold  sparkling red to go with his steamed vegetables. I had not been as embarrassed since the Coral Snakes tours when Casinader would always ask for a glass of hot water in every country caff we went into. 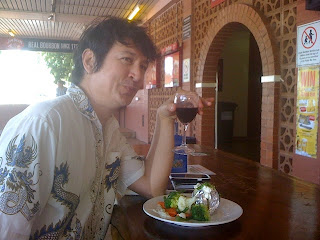 Clare came back, telling us of the poster she saw for an upcoming performance by JENNY TALIA, a comely looking songstress, as they would no doubt portray her in JJJ UNEARTHED WORLD.

Sadly, we took a  flight back to Melbourne at 1am.  The airport was packed with people,among them, a drummer who used to be a hairdresser in Syth Melbourne who had just done 11 shows in 12 days in the intererior. And had lived. He and the young guitarist were flying back, the rest of the band were driving to Melbourne. Due to arrive in  a week. We had flown up for ONE gig. The young fellow didn't know us from Adam and the Ants but stared at us in awe. 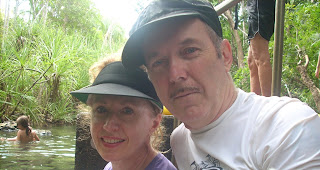 Got back into Melbourne and had breakfast at a super ccool joint we'd always driven past called POPE JOAN and then I did the radio show on RRR.

On the next Friday we did a gig in the front bar of the Prince of Wales in St Kilda....

Every friday evening in september dave graney will be playing an acoustic solo set at the Cornish Arms in Sydney rd Brunswick.

I'm heading to Byron Bay for some Splendor in the  grass and  writers festival appearances in July...