Into the UK-Manchester Hull London 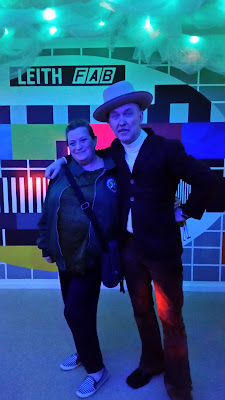 with Pat Waugh in Leith

After playing in Aignan we drove from the bottom of France to the top , with one stopover  in Compagnie. The soul of my patent leather shoe came off and I had to secure it with sticky tape. We drove on to Calais and I went through their version of BORDER FORCE feeling like a derelict. A short ride on the ferry brought us to Dover and we drove to Leeds where we stayed the night ina  hotel on the edge of town. It was full of grey haired people playing cards and being sociable, Georgio found it to be most "exotic".
The next day we drove on to Edinburgh where we rehearsed for two days with Malcolm Ross on guitar and Georgio switching to bass.
In Edinburgh we just had a cool time with Malcolm and Susan Ross and various old friends.
On the Friday we drove to Manchester where we set up at Freds Ale House and met the other band, Poppycock and Bob Osborne, who had helped set the show up. Bob runs a great digital label called German Shepherd.
We then went to the house we were staying at and ate some vegetarian curry. The place we stayed at was a house run by a woman who has bands staying. She was so cool.

The gig was great. A real listening audience. Lots of people who'd seen us before. We would have played a  set of about 16 songs, including two of Malcolms. Lovely people there. Bob and Victoria Egan were a tremendous help.
We would have played about 16 songs, a real excited, attentive audience.
The next day we spent wandering in Manchester in a light drizzle. Met up with some friends who had lived in Melbourne until recently and went to see a Danish/Finnish band who were staying at the same house we were, do a live to Facebook set at the Old Granada TV studios. they were called Liima. A young, electro rock band. No guitars, synths, drums and bass. Very impressive.

Then we drove to Hull and checked into a grim motel. We went to the gig - a rough looking (on the outside) Northern club - and met up with Lou Duffy Howard who had helped set the gig up. We then ate at a  great Kurdish kebab house and went back to the club. It was Sunday and the streets were empty. The gig had a boxing ring in it where we stowed our bags. Gloves hanging over in the corner. A wall lined with punching bags of various sizes. 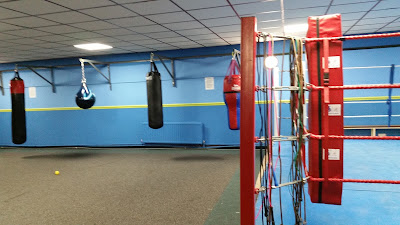 Lou's band, LOUDHAILER ELECTRIC played a set. Lou and her partner Rich had played in a  band called  THE RED GUITARS who we had shared a bill with at the ICA back in 1984. We had only connected recently via social media. They played all kinds of styles linked by Lou's voice and fantastic bass playing with a folk-ish edge to the lyrics. Songs about local stone circles. Rich took some great photos of us. 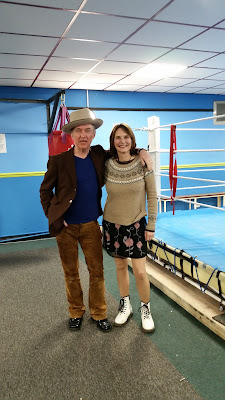 We played our set on their gear. Came off and people were absolutely beaming. They all really dug "Heroic Blues" which we'd started doing for this tour. A fellow mentioned "You Need  A Kleek, Klook" as he'd been to Klooks Kleek in the 60s and saw Jimi Hendrix three times. A bunch of young guys had seen us play at ATP last year. An amazingly switched on crowd.

We had a late breakfast the next day before heading off to London where we were to access our accom at 6:30. Not before a tour of Old Hull. European city of Culture 2017. 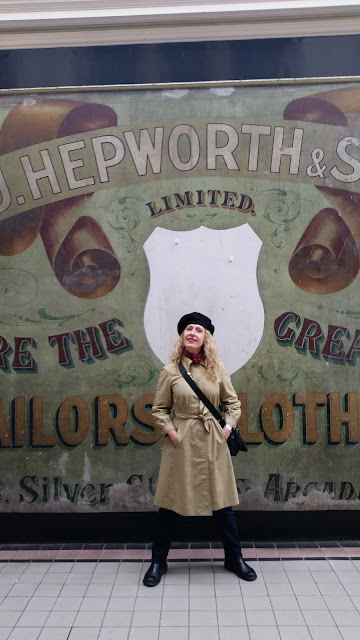 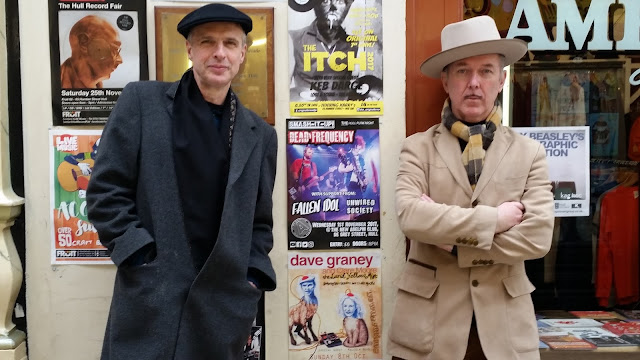 Ross and Graney - hard geezers or what....

We caught up with friends and visited our old pad in Bavaria Rd in N19. Our last residence in the UK which we vacated quickly in 1988. We left all our possessions in someones roof in Hackney, intending to return as soon as we could. 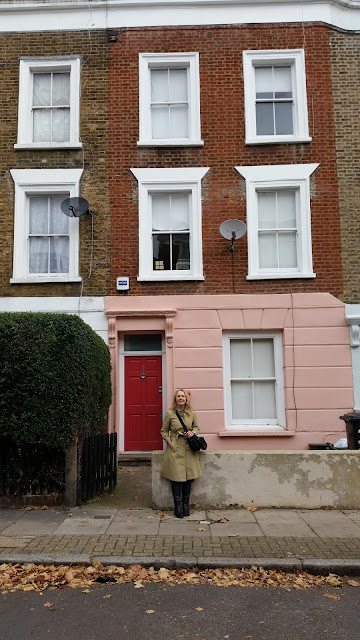 we lived on the top floor for several years and then one day ahd to leave all of a  sudden and...

There was an exhibition of artefacts from the London Undergorund magazines such as IT and Frenz, and OZ at a  gallery near our gig. We also walked around the steadily disappearing Soho area.
I also had to get my patent leather (plastic?) shoes fixed again.  I am determined that I wear them back to Melbourne. And then toss them in a bin.

We played Wednesday and Thursday shows at the Betsey Trotwood. Both nights were pretty wonderful. Many old friends and comrades came along. the support acts of both nights were really cool. Jeremy Tuplin and Gabriel Moreno. Thursday night was kind of kooky. A small room and there was a drugged, kinky air to some people. A  woman was requesting  a song from a  friend on the phone in Australia. She had an unfortunately bossy voice and kept piping up through the set. I lost my nana at one point and imitated her. She told Georgio after that in shitting on her I had shat on myself. True, but she shat me.... It didn't colour the whole event. Loved playing that little venue for two nights. Stewart lee had had to leave quickly the night before as a man insisted on showing him his lyrics on his website- protesting they were " as good as Richard Hawleys!" On the second night as we packed up Clare went to the khazi and immediately came back out as two women were enacting a torrid scene from a raunchy movie in there. London - modern Babylon....

Thanks to Mel Ashton for her generosity in making London so enjoyable. 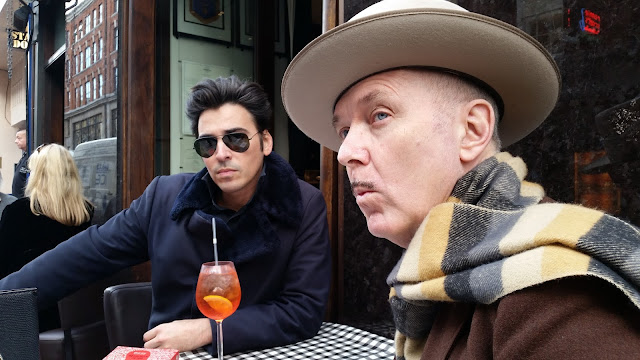 makin' the scene at Bar Italia in Soho...

We then drove all the way back up to Edinburgh and played a gig at Leith Cricket Club with our friends Buckleys Chance and Maggie Holland. Buckleys Chance are Malcolm Ross with Susan Buckley and her brother Billy on vocals and Jim on sax. their usual rhythm section was absent tonight so an acoustic set was played Susan was on autoharp on occasion. Wonderful singing. Maggie is a total folk singer of the old school. Great finger picking guitar played straight into a  mic and one song completely accapella. 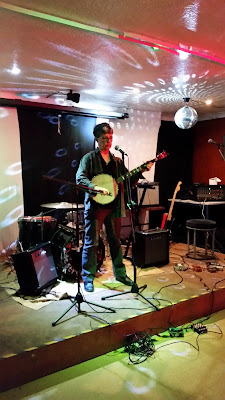 These are the 17 songs we played,


Clinging to the coast
Everything was legendary with robert
A boy named Epic
Twilight Of a Villain
Heroic Blues
Happy Boy (Malcolm Ross)
You need a kleek, klook
How long does the raunch?
All our friends were stars
Robert Ford on the stage
We need a champion
My Avenger (Malcolm Ross)
Night of the wolverine
I been trendy
How can you get out of London?
as good as it gets (Malcolm Ross)
Rock'n'roll is where I hide


Yeah it was a long set and we sorted a few people out. They've gone soft.

Had a very enjoyable tour. So many people helped make it work so well. Especially Georgio "the dove" Valentino who drove us the entire way and played bass and guitar and was such a  great character to spend time with. 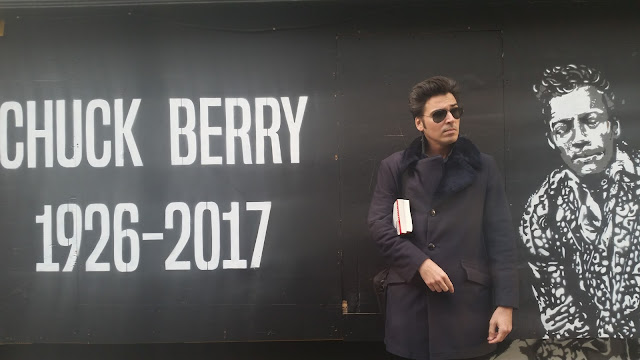 And PATRIZIA who travelled to Vitoria and Aignan to play with us.  And Malcolm Ross who was amazing to play with again. And Susan Ross, both an inspired person and musician.

And Mel Ashton and Josh and Patrick in London and Bernie in Manchester and Luc Tim and Seb in France and Miquel in Spain.

And Lou and Rich in Hull!

And running into so many old comrades.

A few days in Edinburgh and then we return to Melbourne. 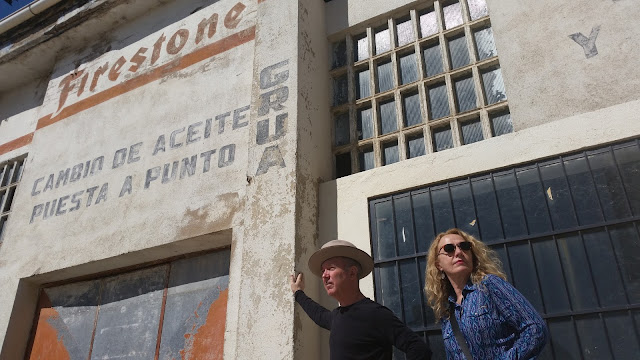 Posted by dave graney at 3:01 AM No comments:

WORKSHY - my life as a bludge - notes