parnassian pass- headin' you off

I still ain't gettin' the hang of this blogging business. i get the feeling its supposed to be more inclusive and conversational. Welcoming even. But I'm stuck in these tracks and thats the way I'm rolling. Too late for everything I'm afraid. Guilty!
Being a musician, its tough when the audience thinks they can run the show. Look at the mess such thinkin' has gotten us into!

Upon reflection, after watching football downstairs whilst reading some stories aboiut the late comic genius Peter Cook, (By the by, there were several moments during the game which could have given the commentators the opportunity to portray the events on the field in an Anzac-iacal light. These opportunities being left begging , I must question the patriotic fervour and spirit of said sporting pundits. they are not putting in! Was all that useless slaughter for nothing?) I have come to the conclusion that my vibe, my general thing, is Parnassian. But perhaps that early and late Parnassian the crossed over into Symbolism. Thus allowing the great respect for formal arrangements that characterized the Parnassian as well as the striving for the opaque objectivism and repulsion for their precursors, the Romantics, who loved to wallow in dank emotion and feeling and free verse. The crossing over into Symbolism could explain the demands and tension my very expressionistic and determinedly individual mythologising places on the classic forms and structures I like to inhabit. I like to hang loose and play wide within a set of boundaries I know and range like the back of my hand. I like to lair and I am a lair and I inhabit a lair. The 2009 Worlds Lair!

Everybody else ? Stuck in a Romantic phase, or is that a neo classical loop? Hopelessly generic for the most part. Rooted in alkaline, sterile water. Hydroponically suspended in a bowl. Smooth between the legs. Stoppered with dried plaster. With no memory of being able to move. 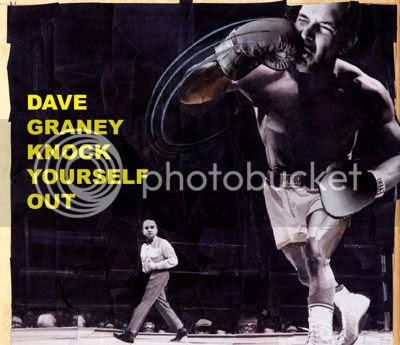 Posted by dave graney at 7:26 PM No comments:

LIVE IN HELL, like its predecessor, "POINT BLANK" is a show we did at the Butterfly Club in Melbourne. the most distinctive thing about performing in the club is that there is ni microphone or PA system or amplification used at all. This is pretty exciting for a performer and singer . Whenever I had to talk up the show to a radio or press person they would always refer to it as "unplugged" or "laidback" when its completely the opposite. With a microphone you cane be intimate and breathy and whispery but without one you have to belt things out , 19th century style.
We used a mic plugged into a small guitar amp for a couple of songs in LIVE IN HELL to give it a little sonic variation. POINT BLANBK was presented with vibes, piano and voice, LIVE IN HELL had Clare Moore on a tiny drum kit (Snare case as a bass drum etc) , Stu Thomas on fuzz Baritone guitar through a tiny amp and Stu Perera on a , luckily, very lou nylon string guitar. We hope to expand the show into a bigger room. POINT BLANK was all my onw songs, LIVE IN HELL was mainly my songs wth some songs by fellow travellers.


This review is about as good a representation/review of Live in Hell as you could get...

"The few fortunate enough to see one of Dave Graney's "Live in Hell" shows at the Butterfly club came away both entertained and enlightened.[I certainly overcame an ennui caused by the sea of banality that we currently swim in.] Neither just a pop hits package nor a lecture from a lectern, the performances were carried by Graney's eloquence and humour, not to mention the considerable contributions by his musical comrades :- the two Stu's (Perera and Thomas) on guitar strings, and the multitalented Moore on glockenspiel,cymbals,snare,melodica,and road case!
A continuation of his earlier cabaret "Point Blank" wherein Graney delved into the nature of performing, "Live in Hell" is purgatory from a performer's perspective. Graney begins by clearing up delusions about deities with a track from his recent album "We Wuz Curious" . "Let's Kill God Again" is not so much an irreligious rant as an appeal to reason. And though the Blues, Rock'n'Roll, and even Jazz have long been labelled "the Devil's music", Graney rejects the very notion of Satan. He chooses Roxy Music's "Bogus Man" to denounce the Devil as just another God-Man construct to frighten us. Later he brings Hell back to the surface with another cover -this time the Fall's "New Face in Hell". The point being that our Hell is here and now not some fanciful fire and brimstone netherworld. He goes on to argue the Devil we fear is other people -using a twisted cover of the Presley hit "One Night with You" which becomes "One Night of sin".
Finally Graney draws on one of his confessed favourite performers- Jim Morrison - reading the Lizard King's "Lament". Though I'm not a fan of this pseudo shaman, Graney uses him to perfectly illustrate a point.ie. By name and nature Rock'n'Roll is about fucking, so Morrison's paean to his penis and the death thereof, expresses the performer's Hell. even Morrison's detractors like his former manager Danny Fields who denounce his poetry as "sophomoric bullshit babble" recognized that pound for pound Jimbo had more cockmeat than most. "He was sexier than his poetry" conceding "he had a big dick". And Morrison's penchant for flopping it out onstage left nothing to the imagination. But to be effective it requires more
than just a willingness to wave your wiener. As evidenced by the success of some eg. Iggy and Lux, and the failure of others eg. GG and Fred - the latter just look pathetic. Morrison combined his cock with a look copped from whip-dancing Warhol/VU sidekick Gerard Malanga to create a wet dream for his hippie fans. So maybe in a flash of peyote-induced clarity, Morrison imagined his own impotence [performance anxiety?] and saw his own Hell ? When it became a reality for the fat and flaccid Door-man, it wasn't long before his corpulent corpse was found bobbing in the bathtub. For a Rock'n'Roll performer onanism isn't an option - though many succumb. Pop music is a veritable magnet for masturbators. Dave Graney knows this and paints his Hell as a sea of wasted "guz" [which we're told is a combination of jiz and diz]. But he needn't worry - his potent performance tonight proves it! "

La Mascara
Posted by dave graney at 6:36 PM No comments: