This is our April digital release. It came out of the toob (?) April 20th. Its credited to Dave Graney and Clare Moore.

We've long marvelled at the creativity of 70s reggae, how they often used backing tracks over and over with different vocals over the top. We wanted to have a shot at that sort of thing. This track is the first result of that type of experimentation. The song is built around a drum track from "You Had To Be Drunk" from the 2007 album WE WUZ CURIOUS.

I played the bass line, which I had been fooling around with for a couple of years and took some time to find the right swinging pocket to hook in with the drums.

I then put the guitar down. This acoustic guitar is a very vintage Maton which Des Hefner gave us on our wedding day in 1985. Its been sitting in a corner ever since, more of an ornament than a playing guitar. I started to strum it a couple of years ago and then took it to Maton to get the machine heads fixed and a general tune up. It was intended , in its day, to be more of an entry level instrument than a serious guitar. I loved the sound of it though. It has a tight, boxy sound and seems to really resonate itself on some notes. It features a lot in the clip.


The song took a vocal and that was thrown down with this great mic I bought online in 2015 . Its  a 70s type of mic which was used by tv newsreaders in its day. I love the sound it gets for my voice. Lots of burr and gravel. It cuts through.

Clare played the organ and I put down some electric piano and some tings and triangle.

The song has a Leon Russell/ JJ Cale kind of a  feel. It's about  a shady player getting some light shone on him and his reaction to that kind of experience. I'm a shady guy. I have also, once, been trendy...

it was nice
a little respite, from runnin' and chasin'
and headlocks and divin"
lights, cameras, smiles

like a party in a tanning salon
I'm no good in the sun
Irish skin
I burned, then blistered
to a violent crisp

it's not my thing
I'm more suited to the shadows
got more to work with there
I been trendy
it was nice
sweet
cute
like a party in a tanning salon"
Our next release is due in May. It's called Drifting Donna Reed.

and then we poceeded to go deep into France

More than three weeks into the tour and we are all still coughing, wheezing and sneezing. We must make show though.
We drove to Manchester, dropped the car off and took a  train to Londons St Pancras where we then took another train to Paris. Me, Clare Moore, Stu Thomas and his partner Gina and Malcolm Ross.

In Paris I talked a pharmacist into giving me some anti biotics, which I gave to Stu and Clare - as I had had a course.

We stayed for a couple of nights in a wonderful Air BnB joint and delighted in a fantastic old school restaurant with our old friend Pascal Cuissot, a film maker. We also went to an exhaustive exhibition of the Velvet Underground at PHILHARMONIE.
There were hoardings of this at Gare Du Nord that were better than most exhibitions!


We then proceeded to  Rennes where we played at Le Bistro De La Cite , Lorient where we played at Le Galion and Binic where we played at Le Chaland Qui Passe. All very unique cities, all in Brittany. Wonderfully warm and generous people. In Lorient Clare, Malcolm and I ate at a Berber restaurant where the owner talked with us in a mad cadence of French which we kept up with - ind of. he gave Clare and Malcolm a shot glass of Eau de Vivre- FIGUE. 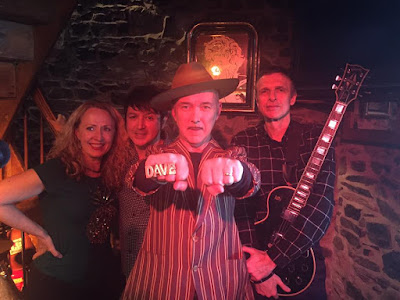 We then drove Malcolm to Nantes where he caught a plane to Scotland and we proceeded to the Loire Valley to play at a house/ chateau party in Azay Le Rideau. Man this joint was RUSTIQUE. Our host were Mel, raised in Geelong but now enjoying life between London and Azay and working for the UN and Chris, a semi retired top shelf music production man. The guests were very international and involved in wine, food, film and antique sourcing activities. There were au pairs. A real glimpse into parallel worlds. Again, very warm and generous people. 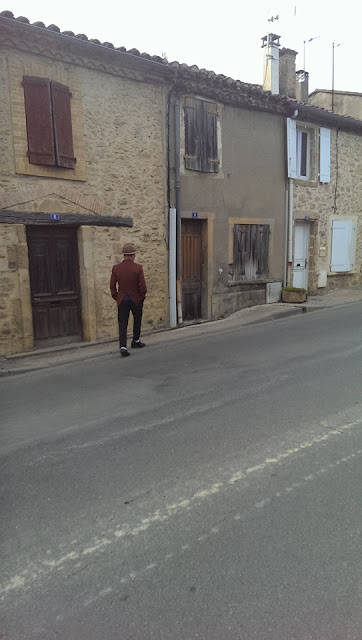 Next was a drive to Aignan where we played at a  rocking house party. People came from all around and stayed up until 4 am. Smoking, drinking and yacking. This place was even RUSTIQUER! 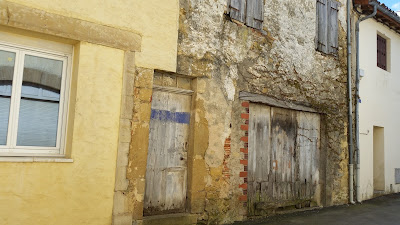 Then we drove to the very bottom of France, close to the Spanish border where we played a show at a large factory/design centre for QUICKSILVER surf gear. A huge place. We played for their workers, in a garden area where people lolled about, drinking beer and wine.... 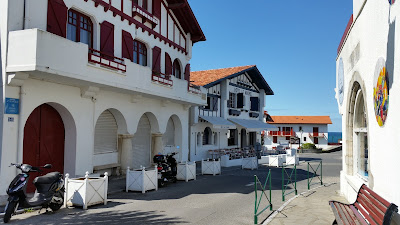 We stayed at a company house which was not unlike the setting of the house in Lost HIGHWAY / KISS ME DEADLY. A house directly facing the ocean with windows on three sides full of sun and sea. Other people were staying at the house, from Australia, France and the USA, having an IDEA STORM for designs fro the FALL 2017 season. More parallel worlds... 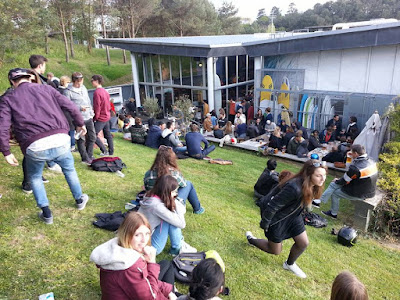 We then drove for ten hours to the other side of Paris where we sought comfort in an IBIS hotel in another rustic village called JAUX. Now we head to Amsterdam.

We played our second show at ATP on the Sunday at 6:45 pm.
This time it was in the middle sized room and we played a rock'n'roll set with Malcolm Ross on guitar alongside Clare, Stu Thomas and me. 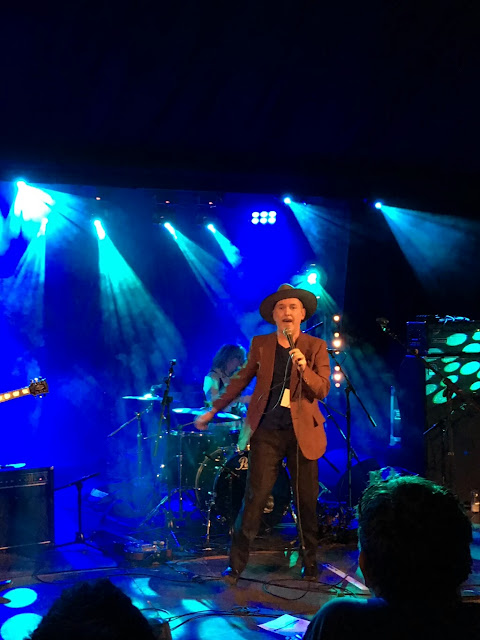 A review of the festival.

There were people who knew different songs from different periods.
A woman came up who'd seen the Moodists play at Harlow College with the Go Betweens in 1984. A couple of people had been at the Hacienda in the same year and other people at Oxford and another couple at a club in West London.

When I'd spoken with Marc Riley I'd talked about the Moodists and he remembered the name - it was the only reference point people have for us - I'd casually said we'd had a breakthrough album with Wolverine in 1993. I forgot to say we got to a new audience who didn't know or need to know anything about the Moodists. It was weird. In that 90s period all our peers, like the former members  Go Betweens and David McComb, couldn't get out of the 80s. They were stuck there. Eventually they reconstituted and retooled themselves. We were scot free. 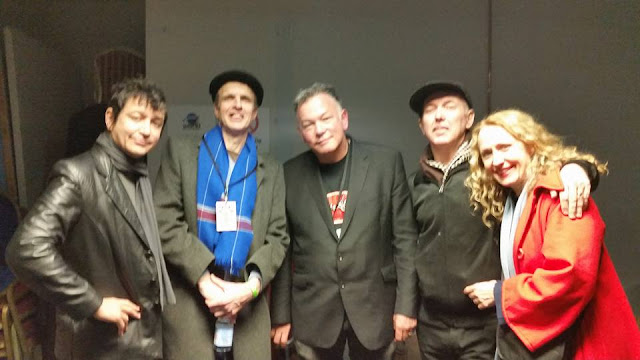