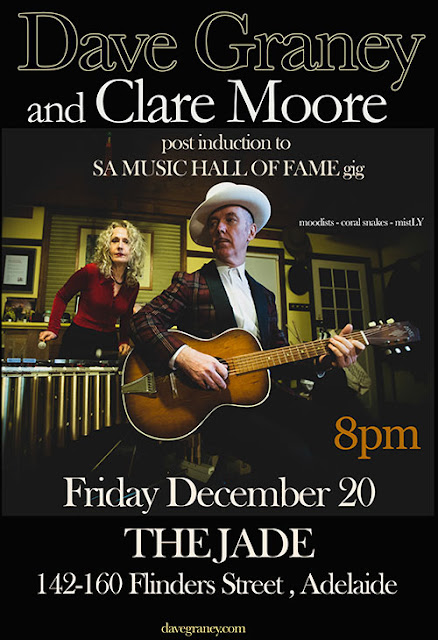 Clare Moore and myself are being inducted into the South Australian Music Hall Of Fame Dec 20th . There will be a formal event and then we will play a show at the Jade Monkey in Adelaide.
We are very pleased about all of this. Very happy to be so honoured. 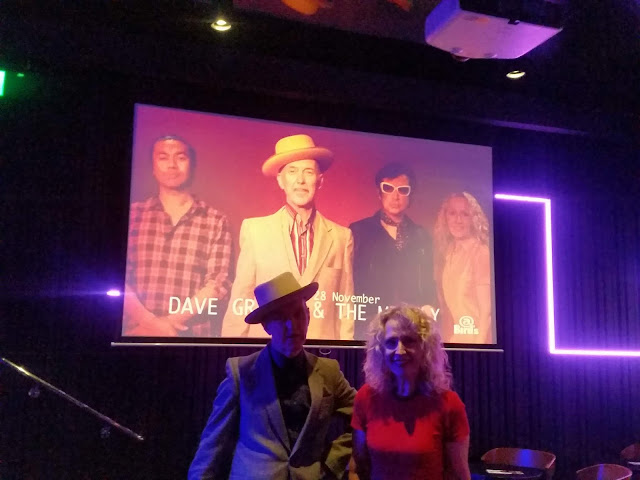 We came back to Melbourne from NSW feeling very upbeat but also very much effected by being in such smoky environments for a week or so. We both sounded like we had head colds and then actually developed something very much like that. Must have been fatigue. We had a couple more dates to do.

There was a show on the ABC about the 90s tv show Recovery which we watched in our beaten up states. We had appeared on the show in every year of the three it was on and in one episode, played three songs. Our old friend Tony Mahony was very involved in the look of the show. We didn't feature in this brutally revisionist show, it stayed closely to the tracks of what "90s" Australian music has come to be represented as  and tv people who later blew up big like Rove McManus and film people like Leigh Whannell were given much air time.

Oh well. History belongs to the winners. This clip was recorded very early one morning for the show. That daay we also performed The Confessions Of Serge Gainsbourg and I'm Gonna Live In My Own Big World.


I twisted my ankle on the day before the Melbourne gig which was to be at Birds Basement.
This is an amazing room in the city. Such great equipment and sight lines and video screens and seats for all. Top shelf entertainment.
Melbourne has had nothing like it since the Continental in the 90s.
I was feeling the smoke damage and limping but Dr Footlights and the great sound in the room helped the gig immensely. 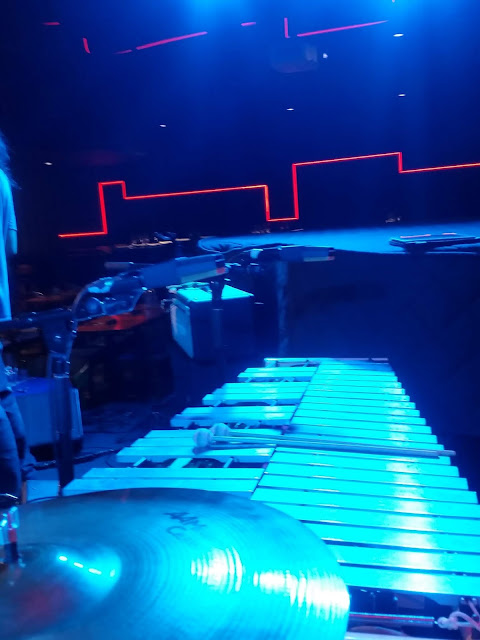 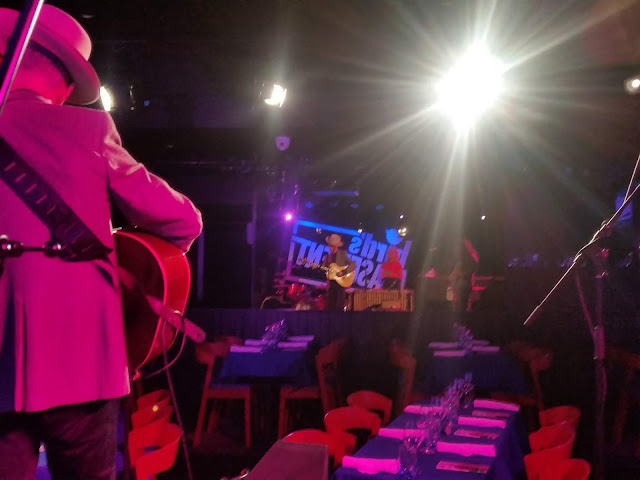 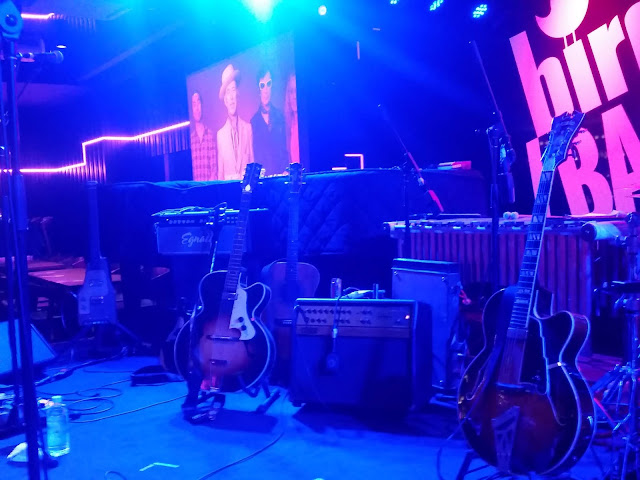 We played two sets of music from the two albums we have released this year. That was it.Bam!
People were there from Japan, Edinburgh, Cairns, Sydney, Hobart and from Melbourne.

There were tables butting right up to the lip of the stage. One right in front of me had a bunch of those blowhard Melbourne people who think they run the scene. So far up themselves they haven't seen daylight for years. Their faces- they were off them. No stamina. Dry bobs. Jaded bums. They left after the first set.

You Can't Have Your Boogie.


The next day Clare Moore and I drove to Yea where there was a gig to do with Alyce Platt. This was in  a marquee tent outside Yea in a  place called Strath Creek. Alyce entertained the crowd of country folk like a true professional.

We stayed the night in Yea and drove on to Beechworth where  Clare and I did a vibes and guitar gig in a lovely hotel called Tanswells. It was still quite close combat but we had a reckless feeling that it was the end of a years playing and I told the audience that. The rules of engagement were ours to set down. We played two sets of songs from the two current albums and some from 2014 and 2017 and 1995 and 2001. Sounded great to me. Though I was freewheeling it like a resistance comrade.

Beechworth is a very pretty National Trust town. People are quite sophisticated. The Good Life abounds.

I had a strong vision during the show about the intensity and power musicians have to possess at their call. People drift in and out of the room you are in and also in and out of your life. They are wandering eyes and ears and their attention is cheaply bought for the most part. Still, when they wander back in you have to be delivering the noise and the pain at that same power and intensity. They get to wander, you get to focus and burn. You make it look easy. Mostly, they can't tell the difference. You can't let that kind of thought distract you. You also imagine them stronger and more interesting. Sometimes all this slides in and meshes all together. For everybody.

That night in Beechworth there was a metal fest just up the road in a beautiful hall and a Baroque string quartet playing in another hall right next to that. We were staying upstairs at Tanswells and so were most of the metal bands and also some of the grey haired motorbike riders who had followed us accidentally from Yea. We stayed up for a while talking with fellow musicians from the metal fold. I love the intensity metal fans bring to music and the way they elevate the bands. Also the way they are all so happy and the bands support each other. Here is who played. 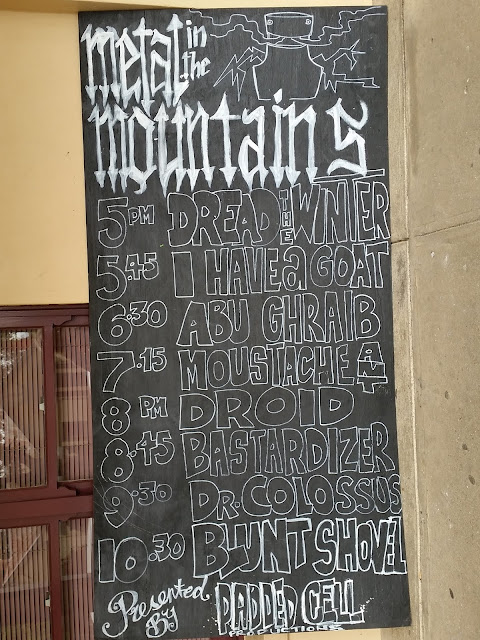 Clare liked the band name I HAVE A GOAT. I preferred BASTARDIZER.

It was a great way to end the year. Thanks to everybody who has come to our show and forked out for the albums we have made. I am so happy with them , especially ONE MILLION YEARS DC which I consider my strongest ever set of songs.

Dec 20th Dave Graney and Clare Moore inducted into AMC SA Hall of Fame in Adelaide at the Jade Monkey.

‘ONE MILLION YEARS DC which I consider my strongest ever set of songs’….

Hold on to that thought ‘cos yr bang-on Dave! The last 20 years there’s never been a Moore/Graney misfire whilst The Dave Graney Show and We Wuz Curious albums were out’n’out triumphs – OMY DC surpasses ‘em. Who else the fuck enters a Hall of Fame with their very best work less than two months released? Only you and Clare could pull that off. If a woman skinnies a man up then Clare’s arrangements, vocals and instrumentation keep the whole album taut and precise as befits such a honed and sharp set of tunes and words. And yr guitar licks? Yr not just tuning that thing - best ever! A certain beloved entertainer will certainly be keeping an eye out for the pick of which to filch…. If you spy him in the Adelaide shadows, job him one next time.